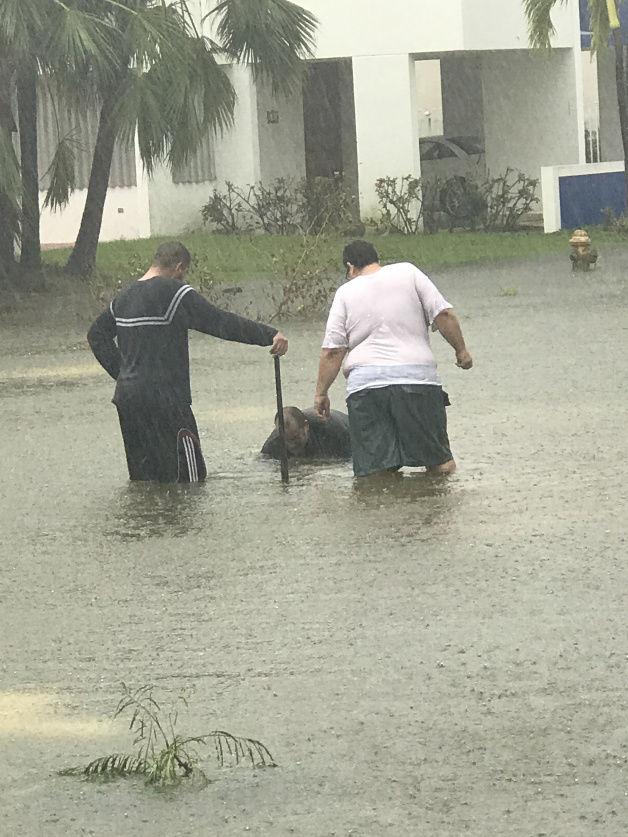 Former Iowa State women's basketball player Chelsea Poppens was living in Puerto Rico when Hurricane Maria hit the island. The streets were flooded in her community, but they still had running water.

Chelsea Poppens came to Puerto Rico in early September with the focus of playing professional basketball for Gigantes de Carolina in the San Juan area.

Little did she know her world and perspective of life would be flipped 180 degrees in a matter of weeks.

First, it was Hurricane Irma.

The former Iowa State women’s basketball player and her roommate braced for impact when Irma came closer. She admits they were scared and were ready to move on a moment’s notice.

“We were scared at first,” Poppens said. “We loaded all of our bags into our car, trying to go over to our teammates or somewhere. We ended up staying at our place because we had a generator there and our neighbors were going to take care of us.”

Once the storm hit, Poppens said the two of them just relaxed and hung out in their place. They lit some candles, played some music, read some books and drank some Coronas. Fortunately, Hurricane Irma only clipped Puerto Rico and made little damage.

In Poppens’ eyes, there was some wind and rain along with some downed trees, but nothing significantly horrible from the storm.

That was it. A sigh of relief came from Poppens and her roommate. But they weren’t done.

Two weeks later, they weren’t clipped, but rather were in the eye of Hurricane Maria, a category five hurricane at that time.

She could hear a whistling through their house because the winds were strong enough to get through the small cracks of the house. Poppens described it as an eerie, horror movie-type whistle.

When Poppens woke up, she saw her roommate huddled up against her door and they just waited out the storm. Trees were falling left and right and their washer and dryer were being tossed around outside like it was a piece of cotton.

Unfortunately, their house had some water damage, but not as bad as most of their neighbors and other teammates.

After waiting the 20 hours until the storm passed, they could evaluate the situation at hand and figure out the next step.

The next steps were to figure out how the two of them were going to live in Puerto Rico until they could get a flight back to the mainland. Luckily, the area they lived in still had running water, so they were able to use that instead of standing in line for that product.

It seemed like gas, food and money were the biggest things people were standing in line for because they needed gas for the generators, food to live and money to purchase these other products since credit cards didn’t work.

“People would stand in line for hours to get gas even if there wasn’t gas at the actual station,” Poppens said. “I heard one person stood in line for five hours to get money from an ATM, so he could purchase gas and food.

“It’s just been a struggle.”

Then, after getting the essentials, the next focus was to get out of Puerto Rico.

The runways in Puerto Rico were still functioning, so planes could pick up passengers from the island and bring them back to the mainland. The main problem was actually getting a flight home.

“I hope so,” Poppens said on returning home soon. “I originally had a flight on Saturday [Sept. 23], but that got cancelled.”

Poppens is living in Fort Myers, Florida as of now to catch up on school and her basketball career. She’s enjoying the luxuries in life like air conditioning, power, warm showers and cell phone service.

She’s made sure to get in contact with her family and plans to see her family soon to reunite. Poppens is fortunate to be back on the mainland and has used this time to reflect on the last month while being in Puerto Rico.

Poppens plans to start creating a fundraiser to help the efforts in Puerto Rico because the island was her home for the last month.

“It’s a struggle,” Poppens said. “You’re kind of cut off from the outside world. My roommate and I kind of joke that we’re kind of living in a war zone.

Poppens said Puerto Rico isn’t suffering by any means, but they’re definitely struggling and need that help at a faster pace.

The weather in Puerto Rico is hot with zero wind, so it’s hard to sleep at night without air conditioning or even fans. It’s just been hard to handle everything going on over the past couple of weeks, Poppens said.

The Red Cross and FEMA are on the island helping with the disaster relief and President Donald Trump just visited Puerto Rico on Oct. 4 to assess the damages and give his support to help with the after effects of Hurricane Maria.

Results of recovery efforts will speak much louder than complaints by San Juan Mayor. Doing everything we can to help great people of PR!

Trump and Carmen Yulin Cruz, mayor of San Juan, have been attacking each other on social media the past week about the help Puerto Rico received since the hurricane.

After Trump visited the island, Cruz wore a shirt saying “Nasty” in capital letters describing how she said Trump turned his back on Puerto Rico and how it was disrespectful for Trump to toss their paper towels to the residents with a basketball-like shot.

The goal is one: saving lives. This is the time to show our “true colors”. We cannot be distracted by anything else. pic.twitter.com/7PAINk19xM

“I think his staff understands now and they have all the data they need,” Cruz said to CNN. “But I would hope that the President of the United States stops spouting out comments that really hurt the people of Puerto Rico because rather than commander in chief he sort of becomes miscommunicator in chief.”