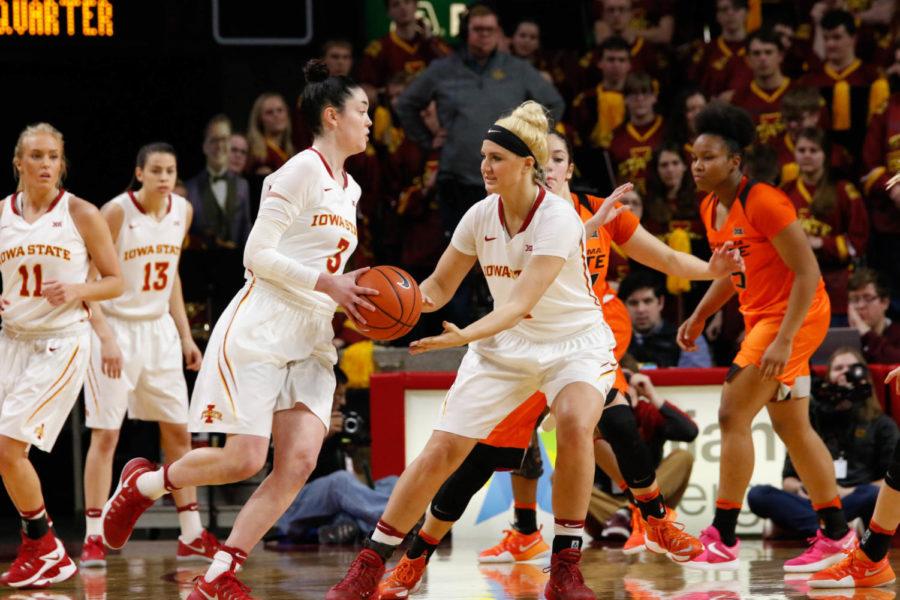 Redshirt senior Heather Bowe hands the ball off to Emily Durr. The Cyclones went on to beat Oklahoma State 61-48 on senior night at Hilton Coliseum.

One of the biggest questions surrounding the Iowa State women’s basketball team entering the 2017-18 season: Who will run the point guard spot?

Coach Bill Fennelly doesn’t have an answer to that question yet.

“Bridget [Carleton] and [Meredith Burkhall],” Fennelly said of the starting lineup. “And then, it’s like the baseball playoffs. To be determined, game time decision or whatever.”

But, he does have plenty of options.

Last year, the point guard position was primarily led by Jadda Buckley. Now, Buckley has departed from Ames and the Cyclones have to replace her 13.9 points, 5.0 assists, and 2.5 rebounds per game from last season.

The options to replace Buckley at point are as followed: senior Emily Durr, sophomore Nia Washington and freshman Rae Johnson.

Durr has the most experience out of three candidates. Last year, she averaged 8.9 points and 2.6 rebounds per game while splitting time with Buckley at the point. However, Durr spent most of the off-season off the court due to having Tommy John surgery on her right elbow.

Due to the surgery, Durr worked on her off-hand some during the recovery process, which she believes will help her while the Cyclones go to a point guard by committee approach.

While Durr is the perceived front-runner to start at point guard, she did have some high praise for Washington and Johnson.

Last season, Washington saw limited playing time. But during that live action, fans were able to see a point guard with good ball-handling skills and is one of the fastest players on the court.

This off-season, Washington has realized that she needs to become a pass first point guard, limit her turnovers and just become smarter at the position.

Now for Johnson, she is kind of an x-factor in Durr’s mind.

Johnson, who was the top prospect from the state of Minnesota in the Class of 2017, is a solid shooter. She has the ability to create her own shot, which makes her so dominant.

Although Durr, Washington and Johnson are solid options, Fennelly has made it clear that the game of basketball has started to evolve into a position-less sport.

“To be honest with you, the game has kind of gone position-less anyway,” Fennelly said. “So we’ve kind of played without one. We’re going to experiment with a lot of different people.”

According to Fennelly, with the raise of the Golden State Warriors, more and more teams are shifting to a style of play without a traditional point guard leading the show and just relying on athleticism and versatility run the offense.

Also, Fennelly has mentioned that Iowa State has practiced without a point guard in practice sometimes this year. But he hasn’t stated that the Cyclones will not be point guard-less.

So could Fennelly and company utilize players like Bridget Carleton or Madison Wise in that ‘Point Forward’ type role like former Iowa State men’s basketball coach Fred Hoiberg did with Royce White and Georges Niang?

Maybe. But one thing is for certain, Fennelly has penalty of options to use at the point guard position heading into this season.