CALS in Uganda: looking back and looking ahead 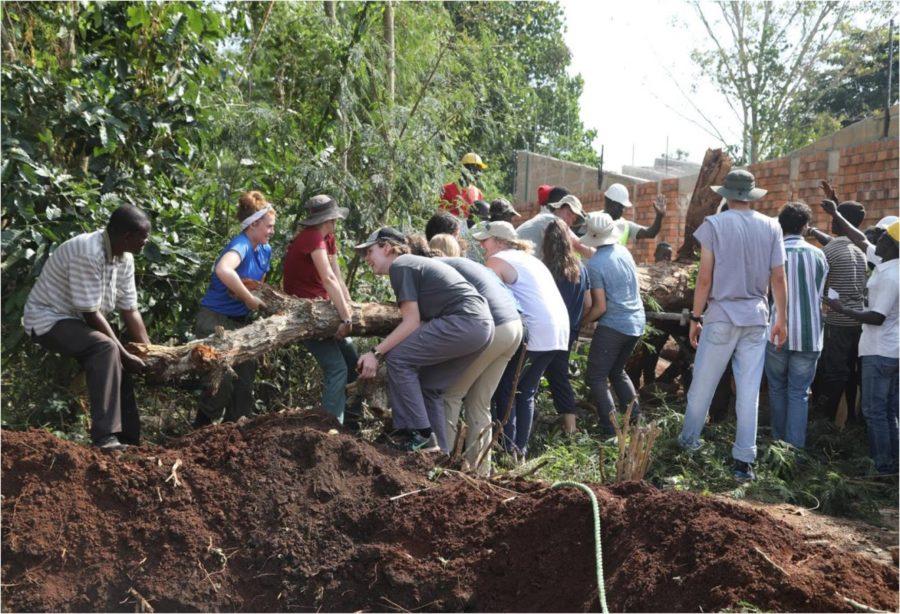 Iowa State students working together work together at the site to transport a tree.

The Kamuli District in Uganda is 7,989 miles away from Ames.

For the past 13 years, ISU faculty and students have traveled those miles to build and aid The Center for Sustainable Rural Livelihoods, (CSRL).

The center opened in 2004 when the College of Agriculture and Life Sciences was challenged to find a place to help work on food security problems and poverty.

“We chose Uganda as a place that was really both in great need but also had great potential,” said David Acker, associate dean of the College of Agriculture, global resources systems.

A commitment of $10 million was given by Gerald and Karen Kolschowsky to continue Iowa State’s involvement in Uganda on a large scale. Both were already supporters of the Sustainable Rural Livelihoods (SRL) program.

Acker said the scope of this project is not to just fix problems on a short-term scale, but to help the local people build up to their capacity. From the beginning, sustainability was a key issue they wanted to address.

After some discussion in 2005, students first came to the center in the summer of 2006. Ever since, the College of Agriculture has been taking groups of student service learners and interns during the summer to the Kamuli District for a two month program.

In Uganda, the small groups of 12 to 13 students spend their days teaching kids at primary schools, completing special projects and informing the community about sustainable agriculture.

“From a service-learner standpoint, it is to provide a service and do what you can, but also making sure the learning is there along the way you are establishing those community relationships,” said Caleb Floss, senior in global resource systems and business economics. “It’s really being an ambassador for Iowa State, the College of Agriculture and even for the U.S.”

Floss traveled to Uganda the summer after his freshman year. Even though he participated in the program toward the beginning of his Iowa State career, his experience still is with him today.

“I was glad I did it so young because I feel like the rest of my time here at Iowa State I have always been open to new ideas,” Floss said.

Acker said the overall goal of the Uganda program is trifold.

Firstly, it is to improve the lives of the local citizens living there. It is to train the community and give them the information they need to be successful.

“We don’t give things away, we teach people how to do it themselves,” Acker said.

The second part of their mission is to train future leaders in the agriculture industry from both Iowa and Uganda.

Students who are a part of this program not only work with their own peers from Iowa State, but work closely with their Ugandan counterparts from universities in Kamuli.

“It was a good partnership, but I felt like I was always the one learning from them,” Floss said.

The third is taking the land-grant mission of using university experience to help rural areas and exemplifying that on a worldwide scale.

One of the most notable accomplishments of the CRSL so far has been the school lunch program that is currently in place.

Before the program, the Ugandan kids were not eating adequate meals. They would show up to school in a condition that distracted them and made them unable to learn.

The center has taught the parents how to grow and organize their crops to make a healthy stew they can give their children. This program now feeds thousands of kids each week.

Looking to the future, a new training facility has been under construction over the past twelve months in the Kamuli District.

Currently, Iowa State leases land across the district for their different facilities. With this new training center, the program will become more centralized and efficient.

The construction phase will finish on Nov. 28. Starting in late January, a small group of students will be the first to experience it as they stay in Uganda for the majority of the spring semester.

This is the first time that students will be visiting the Kamuli District during the school year. This was one of the goals the new training center wanted to achieve.

But this new training center is also focused on having an environmentally stable design. The hot water will come by utilizing solar water heaters and natural ventilation instead of air conditioning.

In addition, the 13-acre plan includes a basketball court and soccer field to be built next to the facilities. These spaces will allow the service leaders to play with the kids they are helping and allow the community to have a place for recreation.

All of the funding for everything that the College of Agriculture has done in Uganda has been from private donors. The college now has hundreds of generous alumni and other donors supporting this project.

“They have opened doors for us, for our students, for our faculty to learn something about Africa that …you just can’t do in a classroom,” Acker said. “Without alumni who turn around and come back so that students can have  great experiences, we wouldn’t be able to have any of this.”