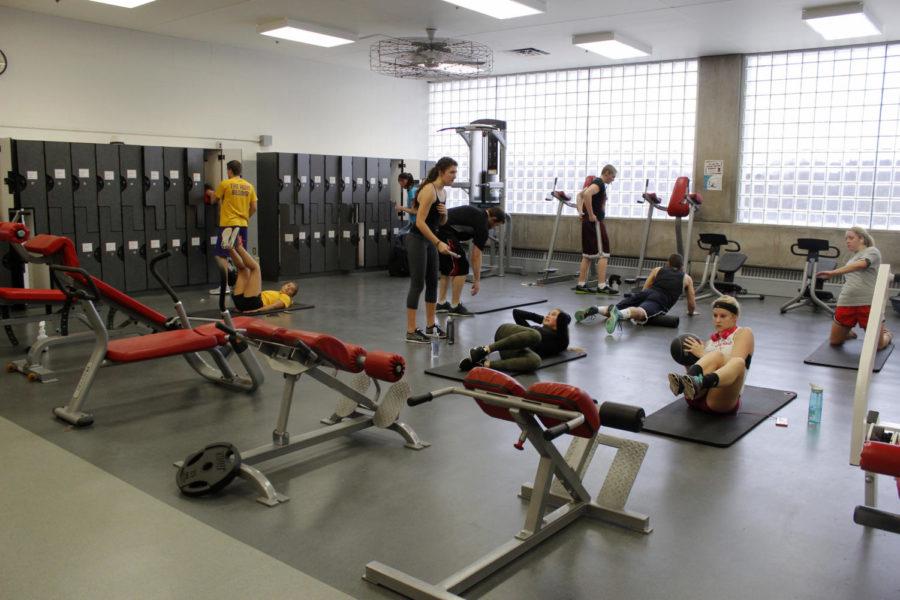 Only a few short weeks after New Year's 2015, many students can be seen at Lied Athletic Facility and State Gym getting in shape due to New Year's resolutions they have made.

Recreation services is working to expand its weight training offerings to all club sports. Teams would receive sport-specific workouts and scheduled sessions under the supervision of personal trainers.

Thus far, the training is only offered to Cyclone Hockey, Iowa State’s Division I hockey team. However, Jake Tatta, Cyclone Hockey’s volunteer strength and conditioning coach, and Nora Hudson, assistant director of fitness and wellness, are pursuing a long-term goal to expand.

Tatta said they are looking to grow the program steadily, adding one sport at a time. They are planning on scouting for clubs during fall semesters and adding them in the spring, beginning with the most competitive.

In the long-term, once the program adds more sports, Tatta is hoping to get a weight room specifically for club sports training. Currently, the space is divided between other services such as group fitness and personal training. Tatta said a designated area would allow for greater freedom in scheduling the clubs and would allow rec services to offer more group fitness classes.

All the personal trainers employed by rec services take a class governed by the American Council on Exercise.

Once the program develops further, Tatta would like to offer an alternative, specialized class for people wanting to become club sports trainers. The class would be taught by Tatta or the current head trainer and governed by the guidelines of the National Strength and Conditioning Association.

Tatta sees the program not only benefiting the clubs its serves, but Iowa State as a whole. He said if the program gets going, it would help the strength and conditioning department become a “hallmark” for Iowa State.

The program started with Cyclone Hockey three years ago after Mitch Zaplatosch, the current graduate assistant, reached out to them.

He had been involved with the team by helping with fitness assessments during his first two years as a personal trainer. Knowing other Division I sports teams had their own strength and conditioning staff, he thought Cyclone Hockey would likely benefit from help with their training as well.

He began by simply designing workouts for players to complete on their own. During his second year working with the team, he began giving players sports nutrition information as well.

Nick Meeks took over Zaplatosch’s position the following year when Zaplatosch became the graduate assistant. Meeks then began getting into the weight room alongside the players.

When he graduated, he passed it on to Tatta. The Cyclone Hockey players are required to attend weight training during one of three sessions each week. This semester’s first training session is on Monday, Oct. 30.

“I’m eager to see where [Tatta] takes the program, as he is very passionate about strength and conditioning,” Zaplatosch said.

The training will be supervised by Tatta, and personal trainers, Matthew Dennis, senior in kinesiology and health, and Brandton Coker, senior in aerospace engineering.

Tatta said the training is designed to help with injuries specifically related to hockey.

“It is more geared toward injury prevention, so we try to prevent what’s called kyphosis, which is an abnormal rounding of the upper back that the hockey players get from hunching over their sticks a little bit,” Tatta said. “Their chest become very overactive and their back muscles become very underactive. We’re working on strengthening those upper back muscles and then stretching out the chest muscles.”

Beyond injury prevention, Tatta said they’re trying to give Cyclone Hockey an “upper edge” against other club teams who may not have a strength and conditioning program.

“We’re trying to give them that one notch up so they can eventually win a championship in their division,” Tatta said.

If and how the program will be funded is yet to be decided. Tatta hopes to receive enough funding to be able to pay the trainers. Currently, the program is on a purely volunteer basis.

Tatta is looking to set up a meeting with Landon Wolfe, club sports director, about the proposal and surveying clubs’ interest in the program.