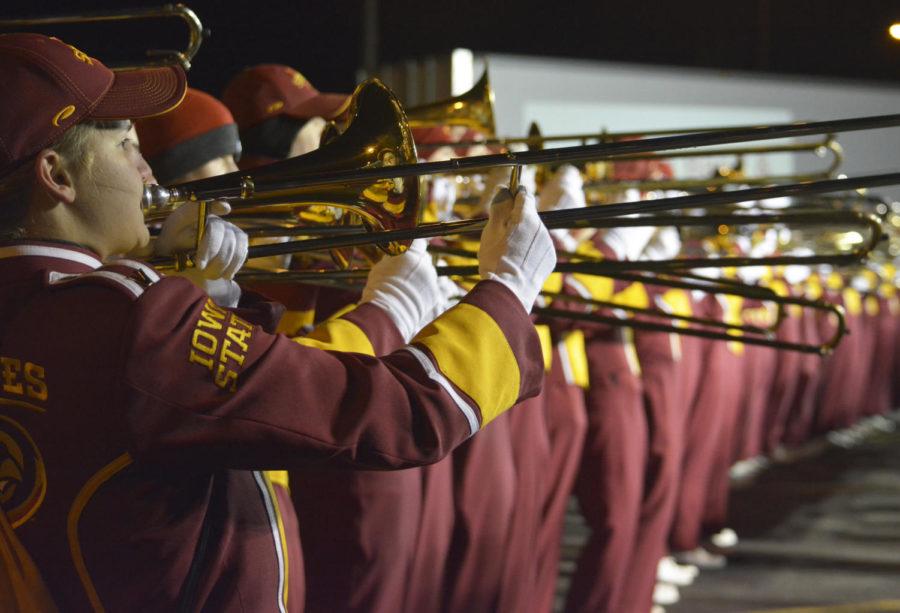 Members of the Iowa State Marching Band perform at the Homecoming Pep Rally outside the Alumni Center on Oct. 27. The Cyclone Marching Band was recently awarded the Sudler Trophy.

Despite Friday’s snowfall and freezing temperatures, the parking lot of the ISU Alumni Center was packed with students and ISU fans for the Homecoming pep rally.

Originally called “Hamburgers for Homecoming” at its start in 1930, the pep rally is an important Homecoming tradition, because it gets fans hyped up for Saturday’s game.

Bri Handel, senior in kinesiology and health, and Tony Catinella, junior in supply chain management, are the special event co-chairs for Homecoming Central. They were determined to not let the weather affect the events, and they showed a lot of excitement and eagerness to see all of their work come to fruition.

“We have spent over a year working on putting this together,” Handel said. “It’s finally nice to see all those emails and phone calls coming into one giant event that everybody gets to enjoy.”

The festivities began with Iowa State’s men’s a capella group, Shy of a Dozen. They performed plenty of hits, including “Year 3000,” “Dream On” and “Jessie’s Girl.”

Nick Hermann, ISU alumnus and former member of Shy of a Dozen, was there to support the group. Hermann has arranged many pieces for the a capella group, many of which were performed at the pep rally.

Sydney Johnson, sophomore in engineering, was a spectator who came to the pep rally to watch the Yell Like Hell skits. Johnson said her favorite Homecoming tradition so far is the pep rally.

The Spirit & Sparkle Squads and the ISU marching band also gave some energetic performances to warm up the crowd. Coach Matt Campbell made an appearance on the stage encouraging fans to “pack the Jack” for Saturday’s game. Both Interim President Ben Allen and President-select Wendy Wintersteen and their spouses were present at the pep rally to show their Cyclone spirit.

The Cardinal Court, the university’s Homecoming royalty, was also announced at the pep rally.

Started in 2006, Cardinal Court is a scholarship program that honors students for their excellence in academics and community service. This year’s Cardinal Court consisted of 11 candidates:

These candidates were chosen out of over 80 applicants, and Amy Kurr and Brooke Almasi were the crowned royals this year.

The three finalists for Yell Like Hell gave their last performances for the judges. They performed in the following order:

Can You Hear It?