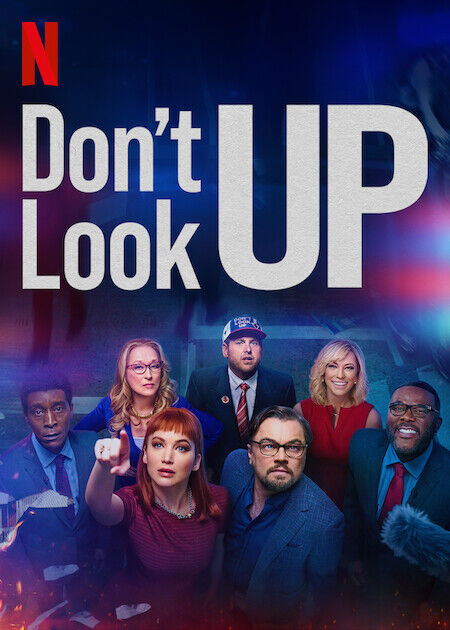 Don't Look Up is a new dark comedy satire film that focuses on issues in our society today.

Apocalypse movies have always been a popular genre. A new film is about to turn the apocalyptic thriller genre on its head by combining elements of dark comedy and drama.

“Don’t Look Up” is the newest film by director Adam Mckay. The film follows two scientists, Dr. Randall Mindy and Kate Dibiasky, played by Leonardo Dicaprio and Jennifer Lawrence, who discover a comet hurtling towards Earth that will destroy the planet in six months.

Throughout the film, the scientists interact with a cast of characters ranging from the president of the United States, played by Meryl Streep, to television co-hosts, played by Cate Blanchett and Tyler Perry, to try to convince them the comet is coming.

“Don’t Look Up” has received largely polarizing reviews from audiences and critics. The film is a satire but does so in a not-so-subtle fashion. While the movie is commenting on reality, it sometimes seems that it can hit a little too close to home.

Personally, I enjoyed “Don’t Look Up.” I thought it gave a very realistic take into how individuals often handle dangerous and tragic situations when faced with their reality. A lot of times, I think people want to believe that if something catastrophic, like a comet coming toward Earth, were to take place, everyone would come together and fight for the good of humanity. However, as we have seen in real life and this film, people’s fear and greed can create their own agendas.

The acting in this movie is top-notch. Although it is a satire, I never felt like it leaned into seeming too much like a skit. Though there is plenty of comedy and small recurring jokes, when the scenes get tense, the actors deliver.

A scene in particular that I really appreciated was when Dr. Mindy explodes on the television anchors and finally tells the American people the truth.

The film plays on many real-life issues and, as such, will definitely be a complicated viewing for some people to enjoy. For many pieces of media, it doesn’t matter much where you stand on the political scale, but I do think individual opinions may be somewhat of a disturbance to whether you enjoy this movie or not.

One issue I did have with the movie was the pacing. The film is quite long, stretching out to almost a two-and-a-half-hour run time, and towards the middle and the end, you can often feel the time. However, though the film does run towards the longer end of the spectrum, I was never bored. Even when scenes were going, it never felt like things were dragging. Although I wouldn’t say it ruined the movie. If you like a fast-paced movie, this may not be the choice for you.

I enjoyed this film and thought, for being a satire, the acting was excellent. I was impressed with the range of emotions given, and I appreciated the smaller parts given to actors like Timothee Chalamet, who plays a Twitch streamer and anarchist type individual named Yule.

Though I probably will not be re-watching this film anytime soon, if you are somebody who likes political humor or satire, I would definitely recommend checking out “Don’t Look Up.”