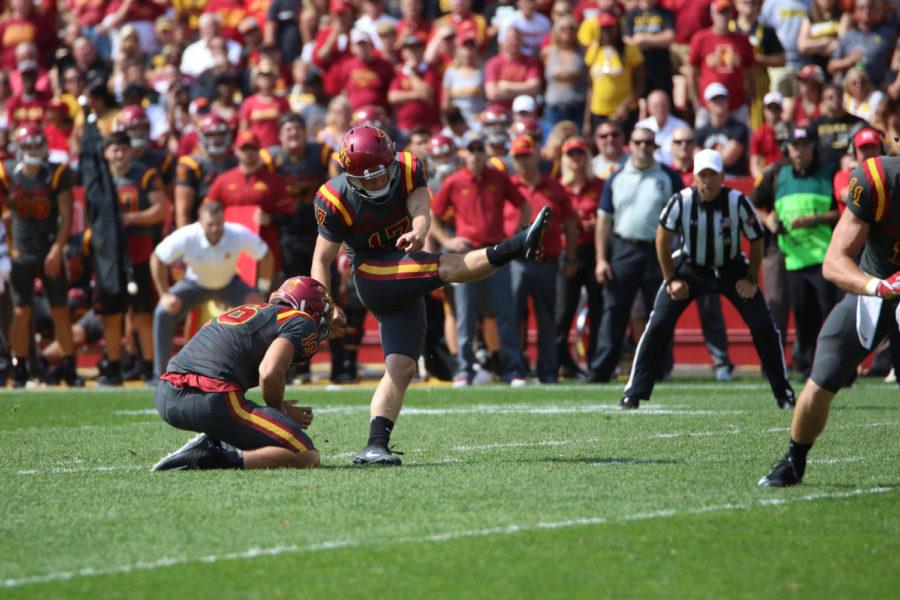 Iowa State kicker Garrett Owens attempts an extra point after a Cyclone touchdown in the first half against Iowa. Owens would hit both of his attempts in the 44-41 loss.

Once self-doubt creeps into any athlete, especially a kicker, it takes a reinvention to find themselves again. Just ask Garrett Owens — a man on a mission.

“I definitely came here with a chip on my shoulder,” Owens said. “It really motivated me and I worked as hard as I’ve ever worked in the offseason to put myself where I am.”

Owens, a graduate transfer from Oregon State, arrived in Ames four years after he started his college career. In Corvallis, the placekicker didn’t see the field until his second season and once let loose, the Beavers had a talented kicker within grasp.

That redshirt freshman season, Owens booted 11 field goals through the uprights on 13 tries. A 84.6 percentage is not bad for a kicker that had no previous college experience. Owens also made a name for himself by drilling all 17 extra points that season.

In his first ever college game alone, he attempted seven field goals, an Oregon State record for a single game. Of those seven attempts, five were good, which tied him for second place for the most field goals made in a single game.

Going into his redshirt sophomore year, the Arroyo Grande, California native picked up right where he left off. Owens went 11-15 in field goals that season and was successful on all 23 extra points.

“Coach [Joe] Houston has been a huge factor to why there has been some success in technique and mechanics [for Garrett Owens],” said coach Matt Campbell. “But you look at Garrett, Garrett’s a guy that I felt like had a little bit of a chip on his shoulder coming in here with something to prove.”

But, as any kicker will tell you, one bad kick and everything that you had established goes down the toilet.

Even Owens couldn’t avoid the inevitable his junior season. In his final season for the Beavers, he connected on only 10 field goals in 17 attempts, but managed to go 37-38 on extra points. But the seven missed field goals haunted him the entire season.

“The past is the past, but I’m fortunate for it because I wouldn’t be here today without it,” Owens said.

The kicker even went as far as to compare it to golf.

“It’s like golf really,” Owens said. “When you go out and golf it’s a mental game. If you have a bad mental you are going to play bad, but in kicking it’s the same thing. If you’re not mentally right you can still be a great kicker, but you’re going to miss a lot because you’re just not there mentally.”

But it wasn’t just the mental side. It was the scenery and to Owens a new scenery was needed. And that’s when Iowa State became the destination for him.

“I think really a fresh start, getting around new people and really around coaches who believe in you and trust in you because once that happened my whole mindset flipped and the fun came back in the game,” Owens said.

The fresh start has really paid off for the senior in his first and only year for the Cyclones. Thus far, Owens has connected on seven of eight field goals and has been perfect on extra points.

Owens’ longest field goal on the season came when he booted a 42-yarder last Saturday. A game in which they upset then-No. 3 Oklahoma in Norman.

In the seven games remaining, the goal is simple for Owens — not to fall into the hole he did at Oregon State and to continue to prove people that he’s one of the top kickers in the nation.

“Just [want] to prove that I can still be an elite field goal kicker,” Owens said.