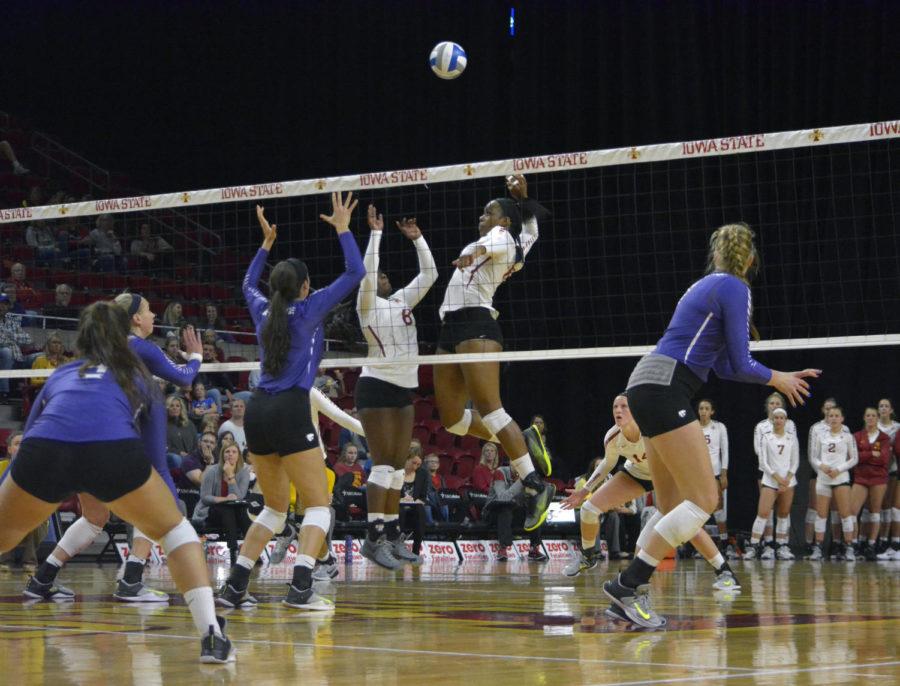 To sum up the Iowa State volleyball team’s performance against the Kansas State Wildcats Wednesday night in one word, it would be dominant.

After a poor outing against the Baylor Bears last Wednesday night at Hilton Coliseum, the Cyclones had a full week of rest and preparation and it showed when they controlled majority of the match defeating the Wildcats in three sets (25-12, 25-16, 27-25).

“You want to feel like you are moving in the right direction,” said coach Christy Johnson-Lynch. “You want to feel like you are energized, focused, you are not feeling sorry for yourself over that. I mean, it’s sports. You are going to lose sometimes. It’s kind of like big deal, let’s move on. I do think we were much more focus over the past several days and brushed that off.”

Unlike the Baylor game, Iowa State’s offense was rolling and rolling early. In the first set, the Cyclones amassed a .333 attacking percentage. Not only were they dominate throughout the first two sets, but Iowa State accomplished what it wanted to succeed on: servicing and getting its middle blockers going.

Like usual, Samara West led the Cyclones in kills with 13. However, fellow middle blocker Grace Lazard was the hot hand early in the first set, as she recorded six kills.

“Just to be up, be available,” Lazard said on what allowed her to be good early on. “Establishing me as a middle… just being up fast.”

Now, it is not just one player for Lazard to become an offensive force for the Cyclones. Iowa State’s setters have to put her in the right situation, and they did that against Kansas State. Also, the coaching staff challenged her to set up her game and she did that as finished with 11 kills.

Freshman Avery Rhodes, who is Iowa State’s de facto third middle blocker, got in on the scoring as she recorded seven kills which was good for fourth on the team Wednesday night.

“We need to get our middles going,” Johnson-Lynch said. “We did a good job of that tonight.”

The other area of focus that Johnson-Lynch wanted the team to improve upon was its serving. While the statistics won’t show it, Johnson-Lynch believes the Cyclones did a great job in that aspect of the game against the Wildcats.

On the night, Iowa State recorded two service aces but also 10 service errors. But according to Johnson-Lynch, more service errors come when a team is serving tough.

“When you serve tougher, you are going to make a few more errors,” Johnson-Lynch said. “That is reflective in the stats, but I thought we kept [Kansas State] off the net quite a bit.”

The current state of Big 12 volleyball is that anybody can beat anyone at any given time. So, to get a conference win, a team must dominate from start to finish, which is what Iowa State did.

The offense was still not at the level that Johnson-Lynch would like, but she was pleased that Iowa State succeeded at the areas she wanted to see improvement in. And Johnson-Lynch is also pleased that the Cyclones can build off this type of performance before heading down to Austin, Texas, to take on the No. 6 Texas Longhorns.

“I thought this was a good game,” West said. “I feel like we are back to our normal, Iowa State selfs. Hopefully we stay that way, and we will be working hard these two days before we go down to Texas.”