Marner: This year is different 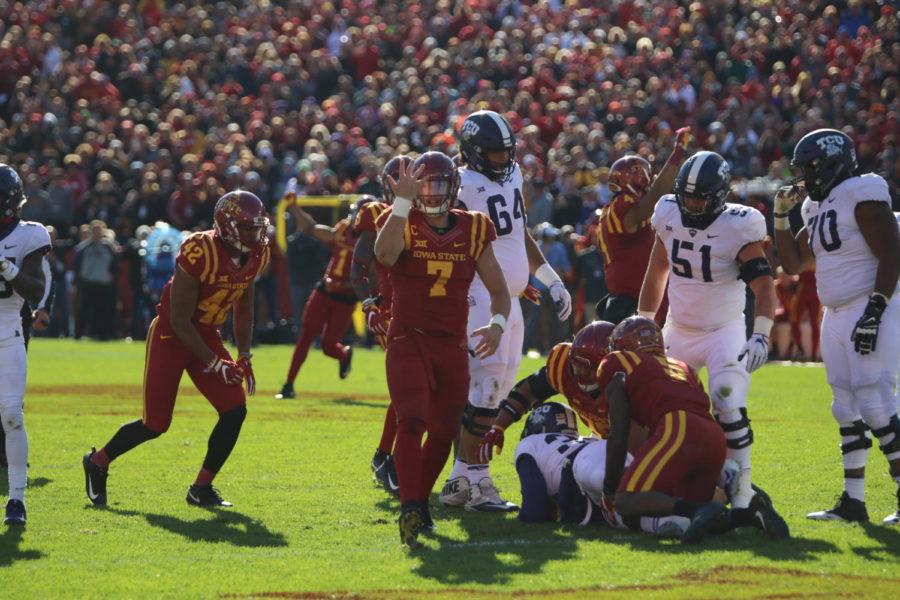 Iowa State linebacker Joel Lanning celebrates after a tackle to force a fourth down in the first half against TCU.

This season is different.

There’s no other way to describe it.

Iowa State doesn’t have a great history on the gridiron, but that doesn’t mean there haven’t been highlights. There was the famous win over Oklahoma State in 2011, the Tornado Game in 2005, Seneca Wallace’s Heisman campaign in 2002, a nine-win season in 2000 and Troy Davis’ entire career in the mid-90s, just to name a few of those highlights.

But that all pales in comparison to the 2017 Iowa State Cyclones.

The 4-1 record in Big 12 play is Iowa State’s best start since… well, ever. The 6-2 overall record is among the best in school history, and for the first time in anyone’s memory, Iowa State controls its own destiny in the Big 12 more than halfway through the league schedule.

That’s a question Iowa State fans have asked themselves regularly for decades. What if Iowa State could hit a field goal when it mattered in 2004 or 2005? What if the 2002 team hadn’t faltered down the stretch, sputtering to a 1-6 record in the second half of the season?

This year looked like it was shaping up the same way four games into the season. The loss to Iowa was heartbreaking for fans and the team. Blowing a 10-point fourth quarter lead at home led to a rough overtime loss. What if the Cyclones had held on for the win?

But now, nobody cares. Sure, it would’ve been nice to win that game, but in the end, what matters is how you respond after those “What If” moments. And boy, has Matt Campbell’s team responded.

The Oklahoma win was huge, and I wrote after the game that Iowa State had been there before — hello, 2011 — but what mattered is whatever happened next. To sum it up: after a potential program-changing win over a No. 2 Oklahoma State team that led to the beginning of the College Football Playoff system and changed the sport forever, Iowa State fell apart. That win was the peak instead of being part of a greater rise.

“There’s always that sense of opportunity missed and I think that’s the intrigue of being a Cyclone fan,” said Brent Blum of the Cyclone Radio Network last week. “You never quite have seen the mountaintop.”

That’s why October 2017 has been different, and it’s why I think Iowa State is for real.

Iowa State has continued that momentum. Matt Campbell is all about the process, and right now, the process is looking mighty fine. It has led to two top-five wins, a four-game winning streak and one of the most incredible single month stretches in college football history.

“When you do fall in love with the process, the process will love you back,” Campbell said after the TCU game.

That’s the motto for this coaching staff and for this team. Work your butt off. Perfect your craft. Worry about the process and what you can control, and the results will take care of themselves.

When I wrote my column after the Oklahoma game at the beginning of this month, I was skeptical about this team’s ability to keep it going. After all, no Iowa State team had ever done what this team has accomplished, and very few teams in recent college football history have matched it.

I definitely didn’t expect Iowa State to be 6-2 at this point (then again, who did?) but that’s what makes this team so special. The wins are nice, clinching a bowl game is great, but nobody on the team is satisfied with this being the end.

“Now it’s just like, we already got our bowl game, now it’s time to turn this thing up even more,” said senior wide receiver Allen Lazard. “How much higher can we go? There’s no stopping now. I said earlier this week, ‘you gave the wrong team confidence.’ There’s no other team that believes in themselves or each other more than us.”

That attitude is different. The attention to detail, something Campbell has been preaching all year, is different. This is a team with talent. They don’t beat themselves.

With confidence at an all-time high, it’s not hard to envision the Cyclones running the table and winning the Big 12. If I had said that in August, I think I would’ve been fired for showing an extreme amount of bias. At the very least I would’ve been asked to take a drug test.

I’m not going to pretend to know what lies ahead for Iowa State, but if October was any indication, the rest of this season is going to be pretty special.