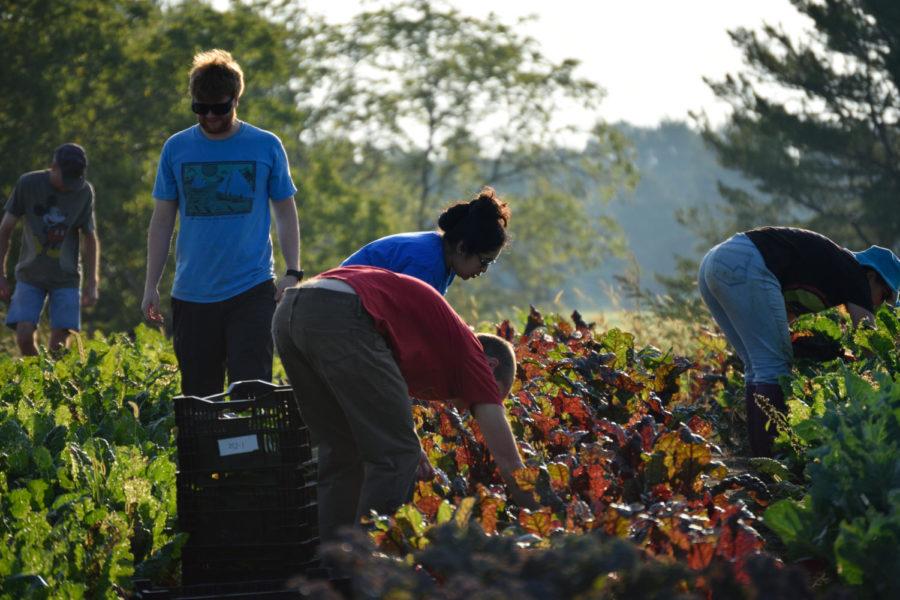 A group of work-for-share CSA members harvest greens. Most of the 50 CSA members pay for their shares.

Hunched along rows of produce, 11 people moved fast to pluck the ripe vegetables nestled within the green leaves. They wiped the sweat from their brows and continued forward under the increasingly hot sun.

The fact that this was a Sunday morning did not faze them. Weekend or not, produce would have to be harvested.

The small plot is maintained by Iowa State students and staff, who grow over 28 kinds of vegetables that are produced on the two-acre field given the season, with many varieties of each kind.

Despite being located at the Horticulture Research Station, which is home to over 90 research projects,  the small farm is not a research project itself. It is the only student organization on the research station, and is set up as a Community Supported Agriculture program (CSA).

Founded in 1997, the club was originally established with the name Heenah Mahyah – a term that means “Mother Earth” in the Ioway Native American dialect. Since then, the club has changed its name to the Good Earth Student Farm.

As a CSA, the club can sell their produce to individuals who want the benefit of eating fresh, organic food. People can either work for a certain “share,” or pay a fee for the produce that is delivered weekly. Fifty members are involved in the farm, most of them opting to utilize the pay-for-share program.

Six students act as officers within the club, managing the land and everything relating to the business side of the CSA. Due to special advantages that the Horticulture Research Station provides, the CSA is open only to Iowa State University staff, students and spouses of staff members.

The small number of members of the CSA creates certain challenges for those within the club. Less people means that it is harder to share the workload, which are considered full time positions by many standards. Tan is the only member who works full time, but she can only work full time in the summer.

“It’s really difficult to have that many people and time invested in [students] when no one else is getting paid, it’s all just volunteer,” she said.

The organization itself is strictly not-for-profit, only taking enough money to pay for the costs of the farm.

“It’s a lot of work, people don’t really realize how much work it really is,” Tan said.

The Good Earth club is advised by two faculty members, Mary Wiedenhoeft and Ajay Nair, but they mainly let the students run the farm themselves.

“It’s more than just gardening in your backyard, it’s you have to have a product, you have to have customer relations, you have to be able to explain what you did so there’s a lot more of management of the system,” said Wiedenhoeft. “It’s a balancing of how much produce you need, how much the resources of labor are and then what does the soil or the land need.”

Their hard work has been paying off. The CSA has always had enough members to do the work and it almost always breaks even.

“It’s rewarding. I think that everyone really enjoys the produce, and I enjoy giving it to them,” Tan said.

While the student farm is considered organic, it is not officially “certified organic” due to the conditions required by federal guidelines.

“We would definitely be interested in doing it,” Tan said. “It’s just that logistically, it’s a lot of paperwork and when you are a student run organization whose members change on a yearly basis, it’s really difficult to maintain that type of paperwork.”

Even so, the student farm still attempts to be as organic as possible.

“We definitely spray only when we absolutely have to and we would only pick certified organic pesticides and herbicides,” Tan said. “From an outside perspective we think why can’t everybody just go organic, or why can’t we just not spray. People think it’s not that hard, but it is. Logistically, you only have so much labor, and you want to produce the best and sometimes your produce doesn’t come out very pretty.”

The sheer variety of natural resources that are available to the student farm allows for them to utilize it to do the work for them. Research projects being conducted on the Horticulture Research Station can help out with pest control on the farm, such as the wasp hives that would eliminate the farm’s caterpillar problems or the tree swallows that would help keep the rest of the bug population down.

The whole environment motivates the students to be more creative in their solutions.

“It just takes a different management style,” Tan said. “You just have to be smart. Smarter than the bugs.”