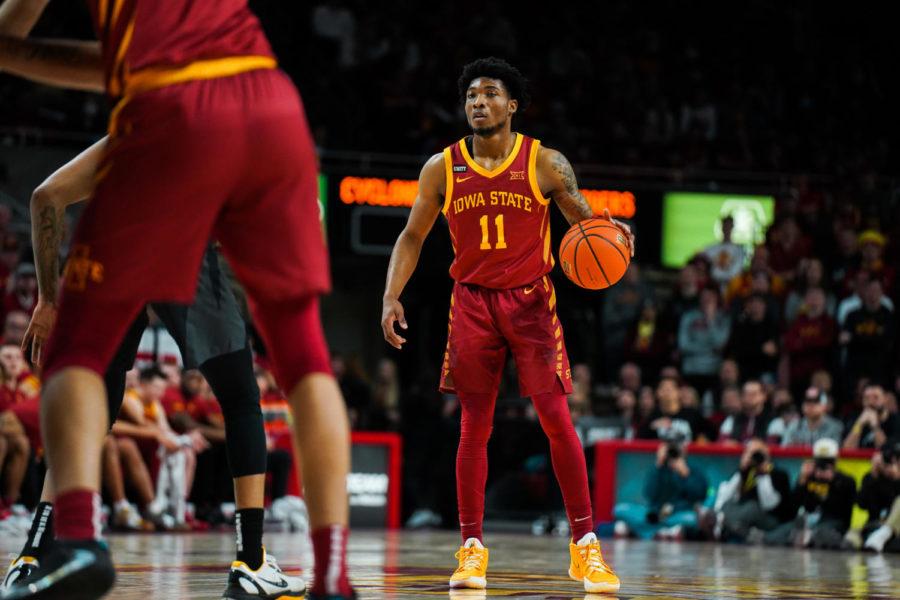 Tyrese Hunter initiates offense for the Cyclones in their win over Missouri on Jan. 29.

AMES- T.J. Otzelberger has frequently talked about being the aggressor, especially early in games.

That box was checked from the Cyclones’ first offensive possession of the game.

Tristan Enaruna rose up and threw down a monstrous dunk for the first two points of the game 38 seconds in as Hilton erupted. The offense wasn’t always that easy as the game went on, but it certainly set the tone.

Iowa State defeated Missouri 67-50 to move to 16-5 and do their part in the Big 12/SEC Challenge. It was in large part thanks to some timely, eruptive offense and a few strong individual performances that led the Cyclones to their 16th win of the season.

It was difficult at times to generate offense for the Cyclones, particularly in the first half. They shot 34 percent, made just one of their ten three-point attempts and led by just three going into the locker room for halftime.

The second half was truly what defined the game.

Neither team scored for the first two and a half minutes of half number two, and Missouri made two free-throws to pull within one to make it 32-31.

The game was eventually tied at 34, and then there was an offensive explosion.

Almost exactly five minutes of basketball were played, and a 15-0 Cyclone run ensued that put the game out of reach for good.

Iowa State ended up winning by 17, so the two teams were going toe-to-toe aside from the 15-0 outburst in the second half. The run was aided by a welcomed balance of stifling defense and balanced offense.

The second half saw the Cyclones shoot 58 percent and make five of their eight threes. Otzelberger also got some key contributions from his bench as his team fought to put the game away.

At the peak of the Cyclones’ second-half barrage, there were two notable players missing from the floor: Izaiah Brockington and Tyrese Hunter.

The two each had strong afternoons as they combined for 29 points, but they were sitting on the bench as the went from 10 to 16 and at times 18.

It was players like Caleb Grill, Aljaz Kunc and George Conditt that were making an impact in the second half to supplement what the Cyclones have come to count on from Brockington and Hunter.

Kunc made three of five threes, Grill provided defensive intensity and added two threes of his own and Conditt scored eight points in the game along with three rebounds and three assists.

Brockington has always been the go-to scorer for Iowa State. As their primary option, he has started to garner more attention from opposing defenses. When Iowa State has faltered, it was often Brockington being hung out to dry as the offense around him never found any sort of rhythm.

Saturday was more of the same scoring for Brockington as he had 15 points, but this time he was able to count on his teammates to turn in a dominant second-half performance as well.

There always seems to be at least one play a game that Tyrese Hunter makes that gets people’s attention. He’s been reliable in terms of making the “wow” plays, whether it’s a nifty dish to a teammate or a splash play on offense.

Against Missouri, he paired those impressive plays with a maturity and tenacity on both ends of the floor that truly displayed the strides he has made since the season opener.

In fact, Saturday’s game against the Tigers was the first game this season where Hunter had zero turnovers. Add that to one of his more efficient games shooting, making seven of 12 shots, and you saw a steady presence on the floor that doesn’t always appear in a freshman.

Four assists and four rebounds to boot made for a dominant overall game for Hunter, as he led his team to the 86th all-time victory for Iowa State over Missouri.