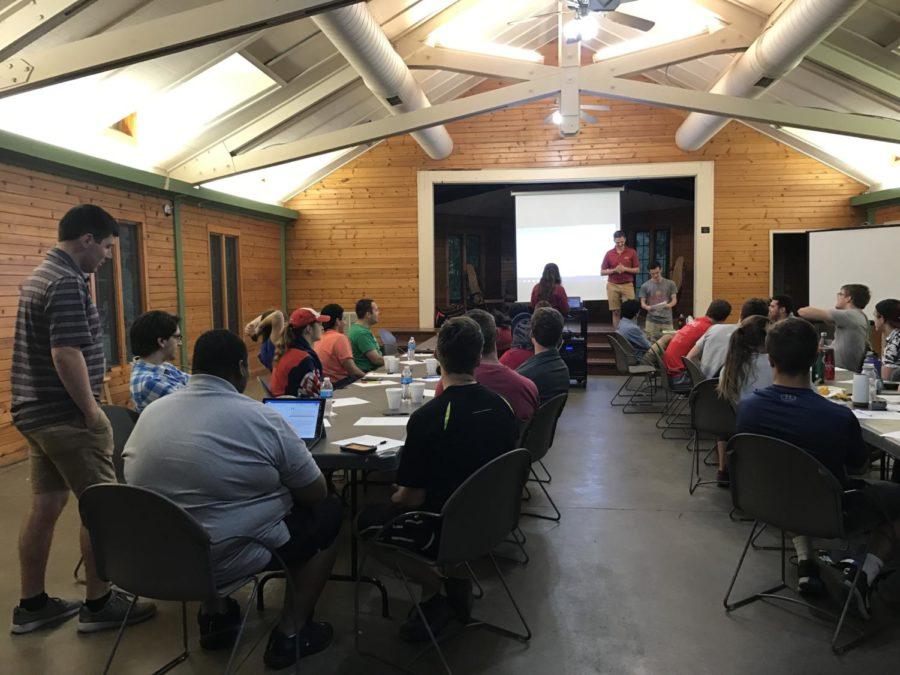 For Speaker Zoey Shipley, who was tasked with organizing the weekend, aimed to establish an environment where senators and cabinet members could learn more about each other, what it means to be an elected official and how to be a respectful leader.

In the first overnight retreat in recent years, Student Government members gathered Friday evening at the YMCA Camp in Boone for leadership and get-to-know-each-other activities, and continued events into Saturday afternoon.

“One thing I took into consideration [when planning the activities] was the stuff that I didn’t enjoy at the last year Student Government retreat,” Shipley said. “We didn’t really get to interact and I felt people didn’t get to grow in their leadership skills or learn about Student Government as a whole.

“So I really wanted to bring in that aspect [interaction, leadership and learning] in and I wanted to do it in a fun way.”

One of the engaging activities the 37 senators and cabinet members began their Saturday morning with was a Robert’s Rules simulation – in which Vice President Cody Smith and Vice Speaker Cody Woodruff draft fake legislation that the senators then had to find a flaw in.

It was dubbed the “everything and anything” bill.

Student Government also heard from Mayor Ann Campbell during the retreat, where senators and cabinet members were able to pose questions about Ames.

“I’m always quite amazed when I come to Student Government,” Campbell said.

Discussing recent issues taken on by the city such as housing and parking regulations with Student Government, Campbell encouraged the senators and cabinet members to get involved and help provide ways in which the students and Ames residents can partake in “compatible living.”

“In terms of being here and being a part of the community – thank you,” Campbell said

Shipley said that by having Campbell come and discuss city government with the students, it serves a richer purpose than presenting a slideshow or presentation about Ames and how the two governmental bodies interact.

Additionally, Student Government underwent an activity on diversity and inclusion which was led by Denise Williams-Klotz, assistant director of Multicultural Student Affairs.

“I am here to start a conversation and to challenge assumptions,” Williams-Klotz said. “Diversity is in a lot of spaces, and today we are going to focus on identities that are traditionally marginalized.”

One of the activities Williams-Klotz had Student Government partake in was dividing them into groups and having them build a paper clip chain. Each time Williams-Klotz said an identity, which had to do with sex, gender, race, socioeconomic status, etc., a paper clip had to be added to one’s chain.

The aim was to have an open discussion about the varying identities of oneself, but also others, and to better educate Student Government on representation and the importance of their role as leaders on campus specifically when considering diversity and inclusion.

“I just saw this as the opportunity to actually make everybody more prepared for their role as a senator,” Shipley said.