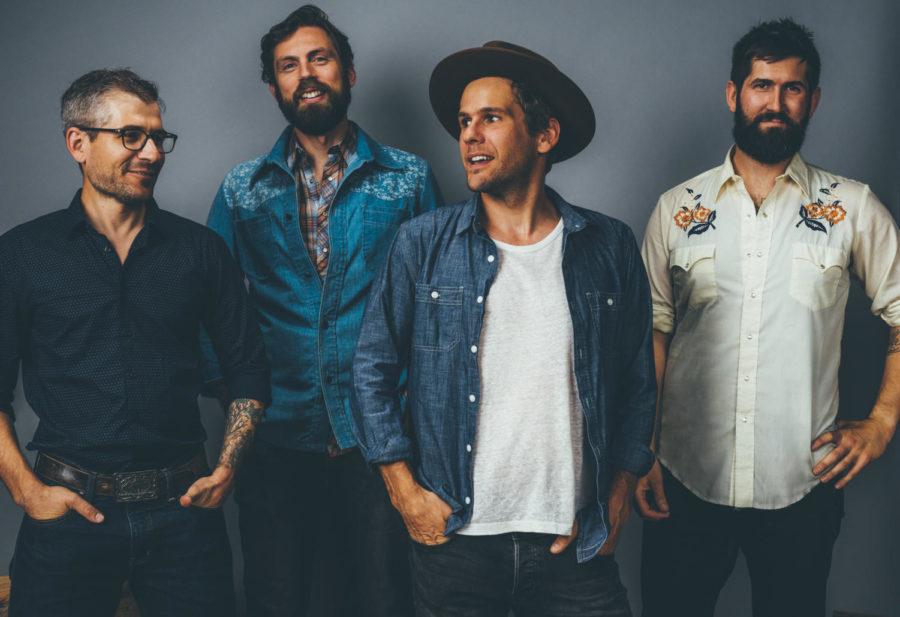 When Trent Wagler, Jay Lapp, Brian Dickel and Eric Brubaker appear on stage together they are The Steel Wheels, a unique roots and Americana band based in the Blue Ridge Mountains of Virginia. They have never sought out to emulate any act before them, and they aren’t out to prove they are the best band. They are centralized in powerful storytelling and a unique, inventive sound only captured by the four friends that make up the group.

Although the groundwork for the band was laid out way back in 2004, the group has been touring consistently since 2010. Along the way they released a slew of content, most notably the albums “Red Wing” (2010) and “Leave Some Things Behind” (2015).

After the initial formation, it was a slow process until the band discovered their own sound. Now they are a mainstay at festivals and constantly working hard on new music.

“I was doing some professional theater out of college,” recalls Trent Wagler, the primary songwriter and lead vocalist for the band. “I would often get cast in roles involving musical elements, because I would always play music and had been in some bands, but never saw it as something that could seriously take me anywhere.”

Wagler went on saying, “As time went on I became frustrated with theater because of how little, from an actor’s standpoint at least, you get to call the shots artistically. I saw a lot of great actors just scrambling for parts, happy with anything they could land. I wasn’t trying to pour my heart into something just for a Tylenol commercial, so I wrote songs more and that became a better creative outlet for me.”

Today, the band tours in support of its newest album, released earlier this year titled “Wild as We Came Here.” This album marks not only an evolution in the way the band approached songs, but also how they perform on stage. This time around they are adding in more percussive elements, including a drummer on stage with them for the first time, which means a lot of classic Steel Wheels songs are now reinvented live with a full, modern sound. They searched for sounds that intrigued them, which led to some peculiar combinations of instruments, like banjo and electric guitar, meeting on numerous songs on the new release.

Wagler spoke on the writing process that went into the new album and provided insight on the inner workings of the band. As a writer, legendary poets inspire him such as Leonard Cohen, Tom Waits and Guy Clark.

“Songs can come to me in a lot of ways,” said Wagler. “There are times when I start by writing down a poem and making a melodic structure around that and then there is times when I start with a chord progression on an instrument. There are two collaborative songs I wrote with Eric, our fiddle player, on the new album. Also, the song ‘Hold On’ featured on the record I co-wrote with an outside writer, Justin Jones. I really have come around to collaborative songwriting in recent years, it is so much fun to combine your strengths with someone else’s. I don’t just write in my corner anymore, I become a more confident songwriter the more I work with others.”

“I enjoy a healthy amount of metaphor in the songs we make,” remarked Wagler. “Enough so that any listener can plug themselves into the song. To me, you can get there from a lot of different places, you can be writing about a very specific, stressful situation, but you can write about the feelings you had rather than the facts, or the who, what, and when. I like to keep things open to interpretation, especially on the new record, which really celebrates nature and what it means to preserve it.”

Wagler went on, “Wherever you are in life, there’s an importance to push yourself to become as original thinker as you can be, instead of just regurgitating thoughts that society might tell us. A big theme of the record is staying wild and staying outside the box, and I think listeners will hear that through the imagery.”

Come see for yourself what Wagler and company’s creations mean to you. The Steel Wheels make their way through the Maintenance Shop Friday, Sept. 22, at 8 pm. Tickets are $20 ($15 with an ISU ID).