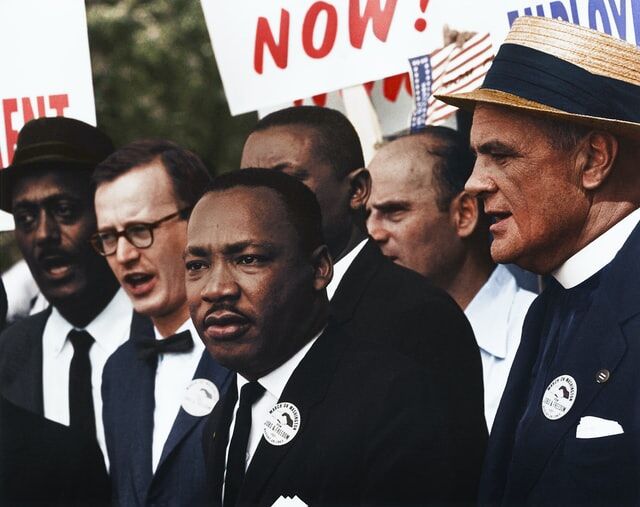 Courtesy of Unseen Histories on Unsplash

January 15, 2022 was the 93rd birthday of Martin Luther King, Jr., who is best known today for his work as a leader of the Civil Rights Movement and as a believer in the power of nonviolent action to bring attention to injustice.

At a celebration event on Monday night, Jeff Johnson, president of the Iowa State Alumni Association, said in his keynote speech, “Committing to loving one another is the only way any of us, regardless of our hardships or successes, will get through this earthly life.”

King graduated with a bachelor’s degree in sociology in 1951 and later a doctorate in theology in 1955. King’s education, his Christian beliefs and his knowledge of Mohandas Gandhi influenced the philosophy that he would develop over time, according to the Martin Luther King, Jr. Research and Education Institute. After completing his education, King moved to Montgomery, the capital of Alabama, to preach at a Baptist church, and it was there that his work as a civil rights leader took off.

In his last speech, commonly referred to as “I’ve Been to the Mountaintop,” King explained that one way for nonviolent direct action to be practiced was through “economic withdrawal,” which was used during the Montgomery bus boycotts. During that time, Black residents of Montgomery, which made up a large majority of the bus system’s income, stopped using the service for over a year. The boycott and the Browder v. Gayle court case resulted in the end of segregation on Alabama buses. King and his family faced multiple threats and acts of violence during and after the boycott.

King also used nonviolent action in his 1963 campaign in Birmingham, Alabama, which he said was “probably the most thoroughly segregated city in the United States.” Again, King and the Southern Christian Leadership Conference, of which he was president, used economic withdrawal as a tactic in Birmingham, timing sit-ins, boycotts and protests for the Easter shopping season when the economic losses would be noticeable.

King knew that, to be effective, nonviolent action and the violent acts that were committed against protestors needed to be seen. Television provided the means for this to be accomplished. During the campaign in Birmingham, the use of dogs and firehoses to attack protestors, as ordered by Birmingham Commissioner of Public Safety Bull Connor, was televised, strengthening support for the protests in that city, according to Britannica.

However, King later said that some of the support that this brought did not continue into later campaigns.

“I came to see that so many people who supported morally and even financially what we were doing in Birmingham and Selma, were really outraged against the extremist behavior of Bull Connor and Jim Clark toward Negroes, rather than believing in genuine equality for Negroes,” King said in 1967.

King was arrested in Birmingham after violating a court order to cease protesting. This gave him an opportunity to publicize and explain his philosophy of nonviolence, writing a letter to white clergy members while in jail.

“Nonviolent direct action seeks to create such a crisis and foster such a tension that a community which has constantly refused to negotiate is forced to confront the issue… I have earnestly opposed violent tension, but there is a type of constructive, nonviolent tension which is necessary for growth,” King said in the letter.

Four months later, King would deliver his famous “I have a dream” speech at the March on Washington for Jobs and Freedom, and the next year, the Civil Rights Act of 1964 would desegregate public spaces. In 1965, King would focus on voting rights, organizing marches from Selma, Alabama to Montgomery.

The Selma marches and the attention they garnered led to the Voting Rights Act of 1965. In a speech on the steps of the Alabama state capitol, King summarized the history of segregation as a strategy employed to divide the unified vote of poor Blacks and whites in the South, saying that “the threat of the free exercise of the ballot by the Negro and the white masses alike resulted in the establishment of a segregated society.”

“Polls close an hour earlier, the timeline for voting by mail has been reduced, there are new restrictions on who can return absentee ballots and more. The question is, who will these changes impact most? They will burden the voices of those who already face the greatest obstacles to participation… There’s just no way to celebrate Dr. King’s legacy without addressing restrictions on voting access,” Faisal said.

King noted that, even after the passage of the Civil Rights Act and the Voting Rights Act, racism was still “deeply rooted all over America,” both in the North and in the South.

Ames Mayor John Haila asked attendees of Monday night’s event to think about how they could improve their community.

“Tonight, I encourage every one of you to join me in building new relationships with people in Ames, and people that may not look like you and may be different from you. To engage in open and honest conversations with others… and ask them what you might be able to do for them. I believe by taking these steps, you will help make Ames a more welcoming and safe community,” Haila said.

King began to work in Northern communities near the end of his life, focusing on housing discrimination against Black residents.

“I can see no more dangerous trend in our country than the constant developing of predominantly Negro central cities ringed by white suburbs,” he said.

While King advocated for protest through nonviolent means, he also believed that people would turn to violence as they became hopeless due to government inaction.

King’s philosophy of nonviolence was challenged during his later work.

“As I have walked among the desperate, rejected and angry young men, I have told them that Molotov cocktails and rifles would not solve their problems. I have tried to offer them my deepest compassion while maintaining my conviction that social change comes most meaningfully through nonviolent action. But they ask—and rightly so—what about Vietnam? They ask if our own nation wasn’t using massive doses of violence to solve its problems, to bring about the changes it wanted,” he said in his 1967 “Beyond Vietnam” speech.

King began focusing on poverty and U.S. foreign policy, speaking against the Vietnam War and calling it “cruel manipulation of the poor.” King made five demands regarding U.S. involvement in Vietnam and said that anyone against the war that was drafted should register as a conscientious objector.

“Every man of humane convictions must decide on the protest that best suits his convictions, but we must all protest,” he said.

King also identified three challenges that he sought to fight against.

“When machines and computers, profit motives and property rights, are considered more important than people, the giant triplets of racism, extreme materialism and militarism are incapable of being conquered,” King said.

King, age 39, was assassinated on April 4, 1968, in Memphis, Tennessee, a day after speaking to the city’s striking sanitation workers. King had been planning a Poor People’s March on Washington, which occurred a month after his death. 2022 is the 54th year since King’s death.