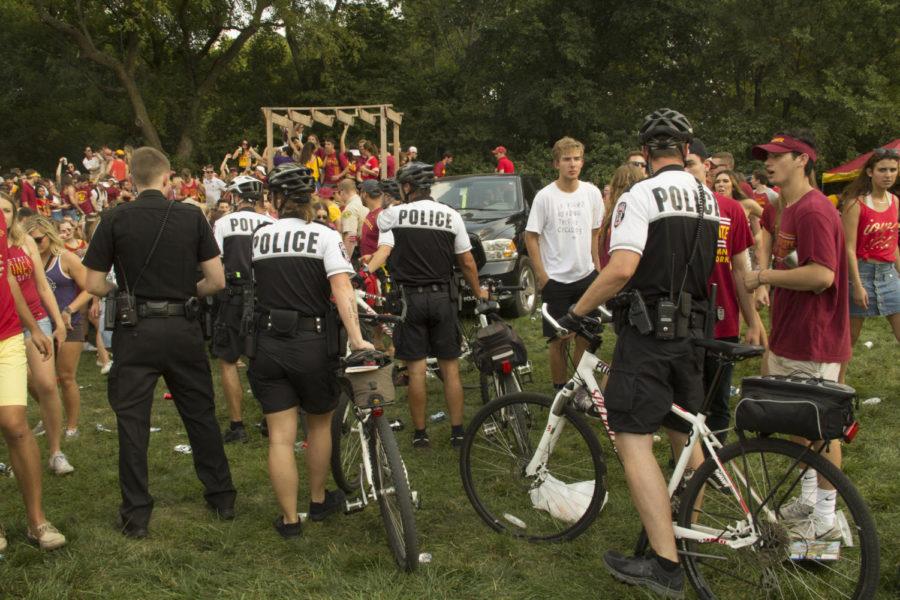 Police speak with tailgaters before the Iowa State vs Northern Iowa football game on Sept. 2, 2017.

Iowa State football fans may have walked away ecstatic over the team’s victory against University of Northern Iowa Saturday night, but for Ames and Iowa State Police, the season’s opening day wasn’t entirely what they’d hoped for.

Ames Police Commander Geoff Huff says alcohol and, in many cases, an absence of personal responsibility lead to a very busy Saturday for both Ames and ISU Police. An influx in calls for service put a strain on police resources, leading to stacked calls and longer response times.

Although Ames Police made the same number of arrests Saturday as they did for last year’s game, 21, Huff says that a higher number of calls for service made this year far busier.

“[In general] when it’s super busy, we always tend to make fewer arrests. Even Veisheas of the past, when we were really busy, we had few arrests,” Huff said. “Because officers know you can’t get tied up if don’t really really have to.”

“I think part of that is the fact that we had some more enforcement teams out doing tailgate patrol around the stadium,” ISU Police Chief Michael Newton said.

Throughout the day, Ames and ISU Police responded to alcohol overdoses, fights and vandalism, all the while keeping order in crammed, rowdy parking lots filled with tailgaters.

Ballard lot, a private lot which annually hosts the Ames Halloween staple the Ames Haunted Forest, was particularly a problem area, according to police.

“We had a few fights, we had a few alcohol overdoses in the lot that we had to deal with,” Huff said. “I think even ISU [police] had to respond over there for us just because we were tied up.”

Newton said that, at one point, 10 Iowa State officers were on scene on that lot in addition to Ames Police and additional units from Story County and Nevada Police.

In another grass lot, bottles were thrown at Iowa State officers as they tried to break up a party in which tailgaters were dancing on top of cars.

“The officers went in and they were able to quickly get the situation under control and get people off of the vehicles and kind of bring things to rest,” Newton said. “Part of that stems from officers breaking up a party at the Ames Haunted Forrest lot and then those folks ended up streaming down to the grass lot.”

Even with the teamwork across all the departments, resources were spread thin.

“When you’re drinking to the point where we have to call an ambulance, it’s a drain on everybody’s resources, the police, fire, Mary Greeley, we just don’t have enough resources for all the poor behavior that we saw,” Huff said. “It’s kind of frustrating for us because people just don’t know how to moderate a little bit.”

As Ames gets busier and busier, hosting larger and larger events like Saturday evening’s football game, stacked calls and long response times have become a concern for police. This weekend was a good example why.

While officers are tied up with alcohol fueled disorderly conduct by Jack Trice, Ames residents have to wait longer for police service, especially if there is no crime currently in progress.

“If you’re reporting a burglary or a theft or something that occurred earlier, and there’s no danger to you right now, you might be sitting there waiting for awhile, especially on these busy weekends,” Huff said.

Huff hopes that people can be understanding on those hectic days.

For police, Saturday’s game highlighted areas for improvement and reaffirmed the need for public campaigns like the one launched last Wednesday. It’s slogan: Be a fan in the stands, not a pain the grass.

Unfortunately for police, too many didn’t follow that advice.

“I think we’re kind of disappointed in some of the stuff we were dealing with. It’s unacceptable to have people drinking to the point of going to the hospital and people fighting and disorderly conduct and vandalism,” Huff said. “Even parking. People were really disrespectful in the way they were parking around the stadium to the people who live in those neighborhoods.”

Newton said that, although the behavior in the stadium was great, some of the conduct before kickoff needs to be addressed.

As the Cyclones prepare for one of the most anticipated football games in the state, next week’s CyHawk game, police are anticipating an even larger turnout and an even busier weekend. While Huff also noted that many make good decisions on game day, those aren’t the people the police are dealing with.

“We know, right now, that next weekend will be worse,” Huff said. “There will be more people here, and more people, unfortunately, equates to more problems.”