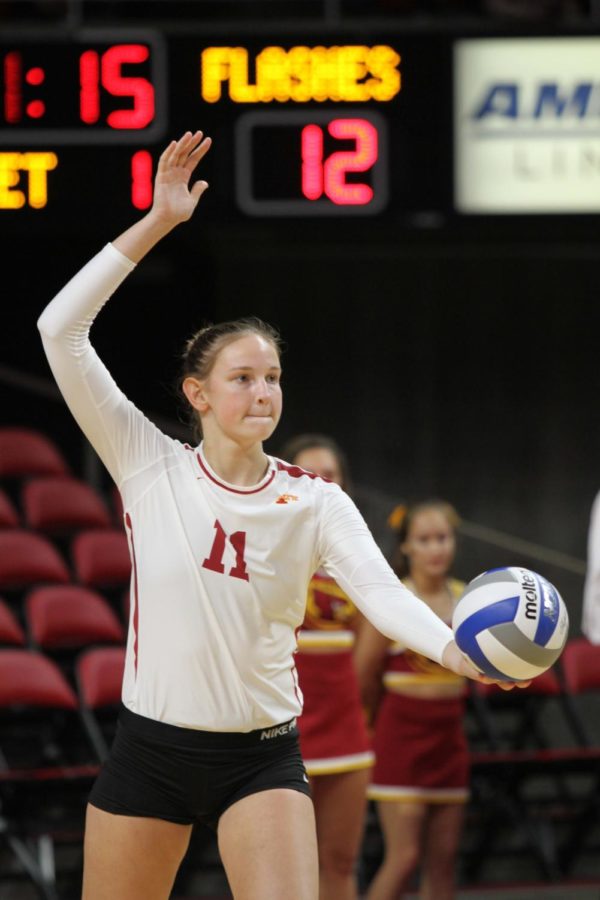 Piper Mauck prepares to serve during a match against Kent State on Aug. 25 in Hilton Coliseum. Cyclones went on to sweep Kent State 3-0 in their first match of the season.

A major key for sustained success in any sport is consistency.

Iowa State volleyball hasn’t had any issues with consistency on the defensive end, but the offense has been another story.

The lack of offensive consistency cost the Cyclones their first loss of the season on Tuesday to Northern Iowa.

“I think it’s the same problem [that] continues to plague us,” coach Christy Johnson-Lynch said. “We’re really good defensively, we’re blocking balls, we’re digging a lot of balls, but we are not offensively where we need to be.”

Throughout Iowa State’s seven game win streak, Johnson-Lynch has tinkered with the 6-2 rotation and the 5-1 rotation.

The 6-2, a rotation relying on two setters, is a tricky rotation to run. The 5-1, a rotation with only one setter, is simpler but the lack of complexity also hampers its effectiveness.

A 6-2 can be difficult because after a hitter gets used to one setter’s set angle and height, the next setter will rotate in, causing the hitters to adjust.

The offense appeared smooth at times and clunky at other times. The Cyclone hitters and blockers struggled to help out their setters, playing inconsistently throughout the match.

Recently, redshirt senior right side Samara West has been abusing volleyballs. On Tuesday, West struggled to get in rhythm against the Panthers.

With West having an off-night, Iowa State needed another option. The Cyclones searched for that option, but no one was able to grasp that role.

Hannah Bailey, Jess Schaben, Alexis Conaway and Grace Lazard all chipped in 10 or more kills, but outside of Conway the group struggled to hit the ball efficiently.

“Unfortunately, I didn’t think we found anyone else to kind of pick up where [West] is normally getting kills for us,” Johnson-Lynch said.

“I looked at the stats. We hit .300 inside out, but in transition we hit .000. That’s a huge difference,” Johnson-Lynch said. “We’re really good first ball, but once that ball goes back and forth we break down.”

Johnson-Lynch said that she can shift her middle blockers around to assist with the struggling transition offense.

Northern Iowa’s style of play hurt the Cyclones’ offense. The Panthers fly around the court and fail to give up on a point until the ball hits the floor.

The Panthers saved multiple balls that appeared destined to end in a Cyclone point.

“UNI is very scrappy, so that can become very frustrating,” West said. “Balls we think are down they [say] ‘nope, I got it up.”

Iowa State put a loss onto its record, but the Cyclones will learn from it. Iowa State’s weaknesses were somewhat exposed on Tuesday, providing an opportunity to correct those flaws.

“[Losing is] inevitable. At some point we’re going to have not a great game,” Conaway said. “I think the big thing for us is to take this game, learn from it and move on.”