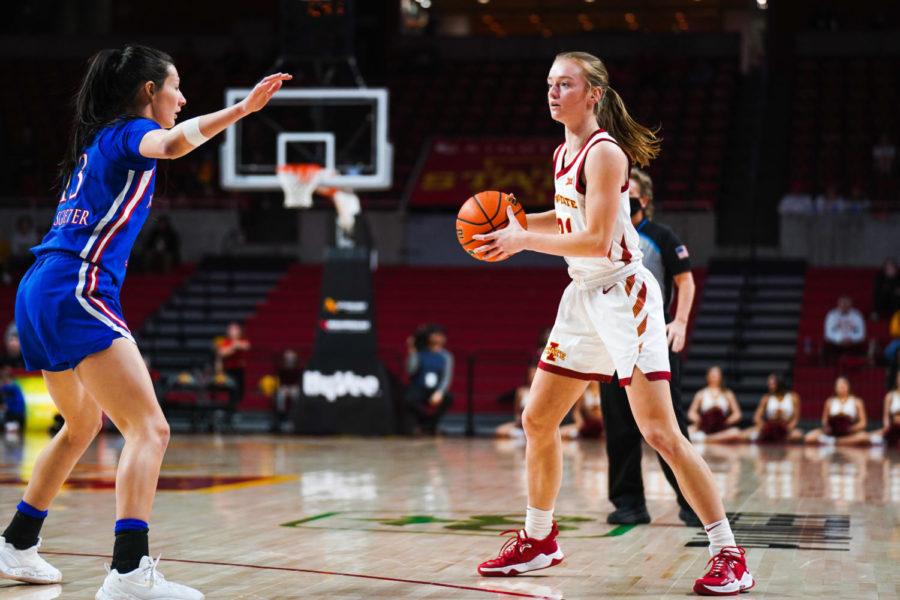 Hoping to make a strong showing at home following back-to-back blowout losses, the No. 13 Iowa State Cyclones did just that with a 77-62 win over the visiting Kansas Jayhawks Wednesday night.

Playing with the lead for all but 38 seconds of the game, it was a course-correction the Cyclones needed to get back on track.

Those corrections came on both an individual level and a broader statistical level.

Emily Ryan, whose assist-to-turnover ratio was an uncharacteristic 5:11 in the Cyclones’ last two games against Texas and Baylor, went back to being the floor general she has been much of the season with nine assists and two turnovers.

“Turnovers are always something you want to limit,” Ryan said. “Still had two turnovers too many, so it’s something I definitely wanna work on cleaning up. Teammates were getting great shots tonight, and that makes my job a lot easier.”

Lexi Donarski made big shots and did what she has quite possibly been the most impressive at all season: defend the other team’s best guard.

Holly Kersgieter, who averages just under 15 points-per-game for Kansas, was held to eight points on 3-9 shooting. She also fouled out of the game.

Fennelly said the effort Donarski puts in on the defensive end has affected her offense, but she has to understand that a somewhat rough shooting percentage isn’t bad when she’s guarding the other team’s best player night-in and night-out.

“Lex does a real good job,” Fennelly said. “We’ve asked her to guard a lot of really good players. But I mean, she’s tough, she’s athletic, she’s long [and] she’s very smart. This is the first game all year she’s been in foul trouble. Kersgieter’s a hard kid to guard. She’s moving all the time, but I thought Lex did a real good job of just staying in front of her.”

This season, Iowa State has relied on winning the three-point battle, as well as winning in the statistics that can be glossed over but matter all the same: second chance points, fast break points and points-off-turnovers.

The team was outperformed in all of those categories in the previous two games, and it wasn’t close. Shooting 28% from three while their opponents shot 41% was the most alarming. Second-chance points (18-10), fast-break points (17-5) and points-off-turnovers (32-13) were also quite ugly.

Against the Jayhawks, however, those numbers went back to what has come to be expected of the Cyclones.

Shooting 38 percent from three while winning second-chance points 10-6, fast-break points 7-0 and points-off-turnovers 19-7 was a big part of the 15-point win.

Fennelly said it was a combination of wanting to fix those numbers and simply playing better that made it happen.

“That’s our team,” Fennelly said. “Make open shots, scouting report defense, don’t foul, make free throws and maximize your possessions in special situations. There’s no secret formula, but that’s how we play. I thought tonight, with the exception of a few minutes, that was the way we played at both ends of the floor.”

Ashley Joens said getting everybody involved in the offense and knocking down big threes helped to boost confidence and give the team some momentum.

She also attributed the team’s defense as a big part of the offense returning to its high-powered state, citing the team’s ability to turn defense into offense as a huge difference.

Combined, the Joens sisters scored 37 points on 12-23 shooting, including 7-15 from three-point-land. They also combined for 17 rebounds.

All season the program hasn’t bought into what Fennelly considers the myth of “must-win” games, but getting a big win at home against a solid Big 12 opponent is definitely something of note at this point in the season.

“Kansas, they’re gonna be in the NCAA Tournament, and I think that’s a win that’s gonna go a long way down the road,” Fennelly said. “Certainly after last week you want something good to happen, and I thought we played really, really well at both ends of the floor. I’m happy that our kids are smiling.”