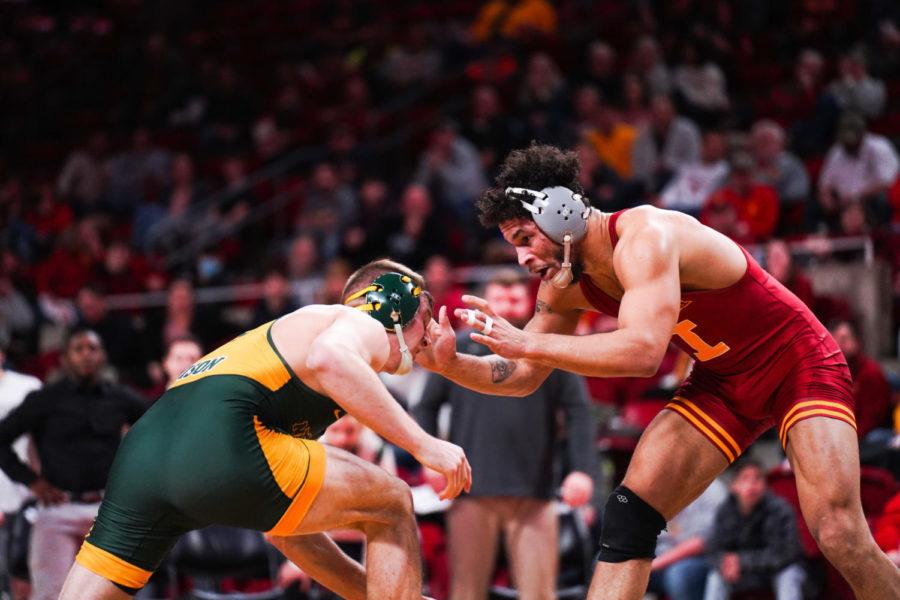 The No. 10 Iowa State wrestling team made their return to Hilton Coliseum a victorious one Sunday afternoon, as they won eight out of ten matches to record a 26-9 win over No. 24 North Dakota State. The Cyclones are now 9-1 on the year, including a 2-0 record in the Big 12.

In those eight wins by the Cyclones, only one was on bonus points, as redshirt senior Marcus Coleman defeated NDSU’s 16-0 to earn the technical fall victory in the 184-pound weight class. The Ames native is now 10-1 on the season, with that lone loss coming at the hands of No. 4 Parker Keckeisen of Northern Iowa at the Daktronics Open in November.

Coleman, along with Yonger Basitda at 197 and Sam Schuyler at 285, rounded off the victory for the Cyclones, with the latter two each scoring victories over ranked opponents. For Iowa State Head Coach Kevin Dresser, it was these matches that stood out.

“I like the way we ended the dual meet,” Dresser said post-dual. “I give North Dakota State credit, they really came back and competed hard. I know that they have some tough guys on their team, and UNI really took it to them last night, and so I was really curious to see how they would rebound. We beat some good guys at the end there, and I liked the effort there.”

Bastida’s match at 197 pounds brought the crowd to its feet, as he defeated No. 23, Owen Pentz, by decision with a score of 9-6. After a couple of scrambles through the first period and scoring 5-4 in his favor, Bastida leveled Pentz with a takedown to open his lead towards the end of the second and registered two more points in the third period to escape with a win.

Bastida first took the lead on a reversal towards the end of the second period to make the score 5-3. When asked about the moment, he said, “I don’t know, I felt like he was on top of me, and I didn’t feel his weight, so I turned around and took the reversal.”

Sam Schuyler rounded off the meet with an upset win over No. 21 Brandon Metz in the heavyweight class. Ranked 27th in the nation heading into the match, Schuyler struck early with a takedown within the first 30 seconds of the opening period and never let go of the lead. An escape and takedown in the final 2 minutes were enough for a 5-2 victory.

“I think I kind of respected him a little too much. I knew he was going to try to throw me, he’s a big dude,” Schuyler said. “I just wanted to move a lot and get to his legs. For the most part, [it was] just wrestling like I normally do, nothing different.”

Elsewhere for the Cyclones, top-ranked David Carr continued his undefeated season with a 7-3 win over No. 7 Jared Franek, and Kysen Terukina also stayed perfect on the year at 125 pounds with an 8-3 decision win over Lucas Rodriguez.

Iowa State will travel to Oklahoma next weekend for matchups against Oklahoma and Oklahoma State. The Cyclones face the Sooners at 7 p.m. Friday and the Cowboys at 2 p.m. Sunday.