Defensive line continues on after death of coach’s son 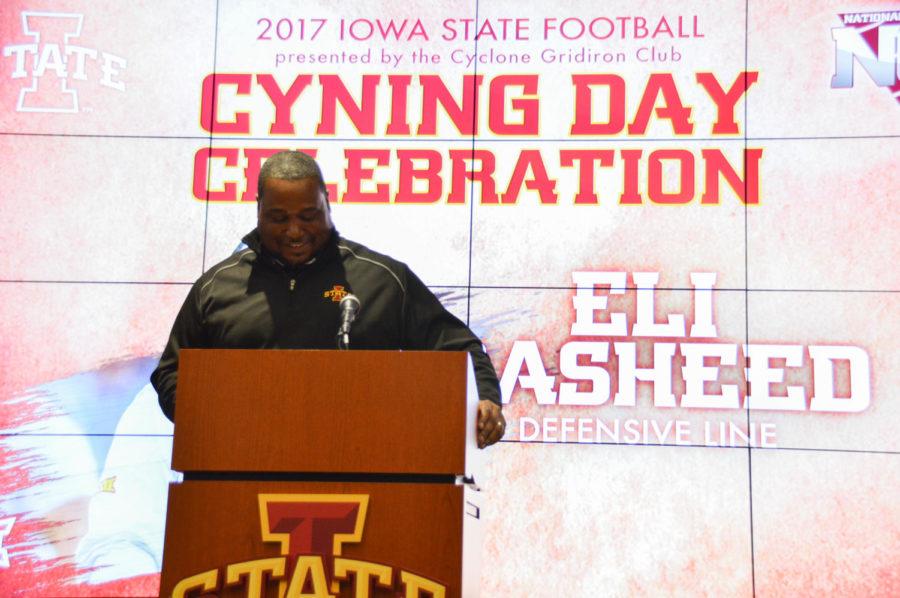 Defensive line coach Eli Rasheed speaks to Cyclone fans during the Cyning Day Celebration at Sukup End Zone Club on Feb. 1. Rasheed and the rest of the coaching staff introduced all of the 2017 recruits.

Iowa State defensive line coach Eli Rasheed spoke to the football team Tuesday about faith and belief. After what Rasheed has been through since late July, the message meant a lot to him and the team.

The last two weeks have been tough for Rasheed, whose son, Osha D. Southward, died in a motorcycle accident July 27 in Toledo, Ohio.

“The one thing I appreciate about the last three months with him is that he was putting God in his world,” Rasheed said. “And he was doing things right, working two jobs and I’m proud of him.”

Southward purchased the motorcycle the same day he eventually died.

Rasheed’s message to the team was to stay positive.

“We had one of our pyramid building blocks and it was about faith and belief,” Rasheed said. “I kind of shared my story and what I’m going through as far as the challenge in my faith and trying to stay strong for my family and those things like that.”

“We all come from different backgrounds but at the same time we all can relate,” Trent said. “We’ve all got our struggles.”

“We wanted to come back and kind of keep things as normal as possible,” Rasheed said. “There’s good days and bad days. You still have to get up and go to work.”

That message stayed with the players this week as practice resumed this week.

Coach Rasheed’s position group is going through a lot of changes since Demond Tucker and Jhaustin Thomas graduated after last season. One of the biggest changes is the addition of Ray Lima on the interior.

At 6-foot-3 and 310 pounds, Lima will be expected to lead a unit that has lacked size in recent years. The coaching staff has called him a culture changer.

“The best thing about Ray Lima is his leadership off the field,” Rasheed said. “He’s a quiet soul, but he does a lot of work off the scene… He’s going to change the culture when no one’s looking.”

Lima, who transferred in from El Camino College in California, said he doesn’t see himself as a leader on the defensive line.

“I still don’t see myself as a leader,” Lima said. “I just try to do whatever I can for the team, whatever coach wants me to do. The leaders of the defensive line are [Vernell] Trent, J.D. Waggoner, those guys. I’m trying to learn from them, they’re battle-tested and I really have no credibility under my belt, I’m just thankful to learn from guys like that.”

“Coach Rasheed, he’s really all about the little things and details,” Lima said. “You won’t find anyone better than him at this level. I’m just thankful I get to be coached by him.”