Takeaways: Dresser challenging guys to impose their will following win over Mocs 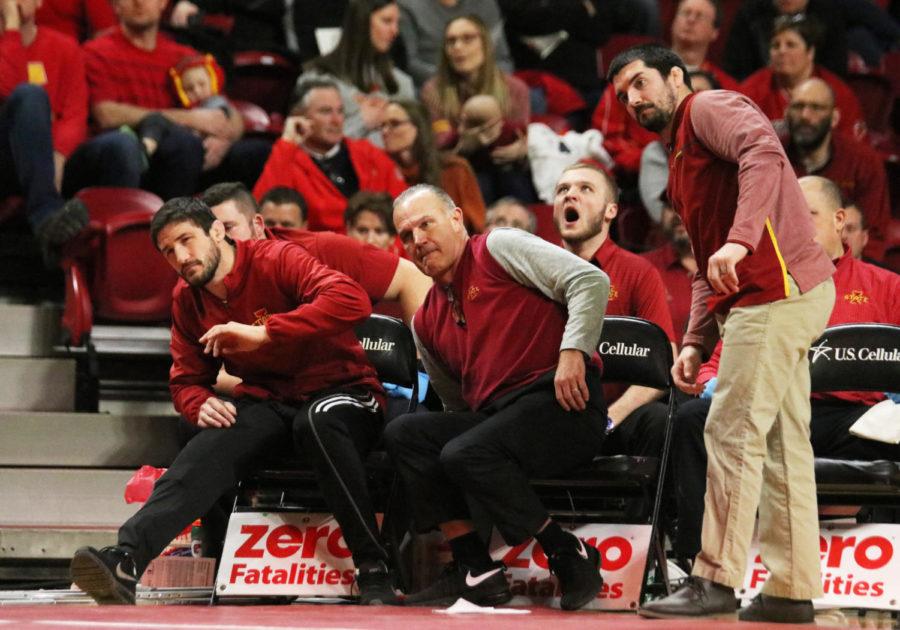 Iowa State wrapped up the 2019 portion of its schedule with a 26-7 victory over Chattanooga Saturday night at Hilton Coliseum. Only one of the eight victories were by bonus points.

Kevin Dresser believes it’s time for the Cyclones to start separating themselves and turn into a top-10 team, a claim he made about the state of the program during media day.

He emphasized it following the win.

“I think we’re a good team right now, [but] great teams separate themselves in situations [like] tonight,” Dresser said. “I don’t want to sound like I wasn’t happy with the performance. It wasn’t terrible, it wasn’t great, it was just good. I don’t like good.”

One glance at the dual results sheet, it’s easy to see where he’s coming from.

David Carr had the only bonus point victory – a 21-6 technical fall – while the remaining seven wins were by decisions. In fact, during three duals and one non-open tournament, the Cyclones have a combined six bonus point victories.

“We’ve got to do some things individually that will put us in the great category,” Dresser said.

If the Cyclones want to finish as a top-10 team at the NCAAs in March, Dresser was asked if he was referring to 125 pounds and 141 as swing weights that can vault them into that spectrum, where both Alex Mackall and Ian Parker were a takedown away from a major decision victory on Saturday.

“You got to be able to clear those guys, basically you got to impose your will on those guys,” Dresser said. “We let people slow us down. This sport, is a lot about entertainment. Nobody wants to see one guy squeezing the other guy, just to keep the score close. We need to blow those open.”

Even with all of this talk, the panic button is far from being pressed. After all, the Cyclones just finished their third dual of the season.

“It’s taking notes and figuring out what we need to do to get better,” Dresser said. “Collectively, we all need to want more. if we’ve got a room full of guys who want more, then we’ll get more.”

Colbray gets win over stagnant wrestler

He didn’t allow Sam Colbray much chance to get into a flow. Waddell was willing to wait it out.

“You kinda got to get pissed when you wrestle someone that’s being pretty stagnant,” Colbray said. “His hand movement, his feet movement, elevation change, they’re obvious.”

Eventually, the 11th-ranked wrestler by InterMat got the takedown at 24 seconds in the sudden victory period to win 3-1.

It’s a win Colbray didn’t seem all that thrilled with.

“I was getting kind of complacent as far as just my wrestling style goes,” Colbray said. “At that point, in sudden victory, I felt like I had already been off my game for the past seven minutes so it was time to get a score in.”

“We got to do more there,” Dresser said. “We’re making baby, baby steps there, nothing colossal.”

After not finishing on the podium at Cliff Keen, it’s not a bad way to end 2019 for Colbray, but even he said he’s got to improve and adjust if he is facing a stagnant wrestler.

“So that doesn’t happen in the future, got to pick up my pace, make guys move that aren’t willing to move as much,” Colbray said. “Got to up my arsenal and not let go to overtime.”

It was a match Dresser called “ugly.”

Todd Small got down 6-3 to Franco Valdez, who had an under .500 record in both overall and duals, and needed to pull off a comeback to win.

The redshirt junior did that with back-to-back escapes and a takedown with seven seconds left to triumph 7-6.

Colbray saw the match from the sideline and was pleased with how the two-time junior college National Champion wrestled after getting into a hole.

“It kind of just shows heart and pace,” Colbray said. “He was having a tough time clearing ties and getting shots. When the score is not in your favor, you got to figure something out and I think that’s what he did. He ended up making the adjustment, proud of him.”

Dresser, however, wasn’t booming with excitement.

“Good for him for winning, but we can’t live like that,” Dresser said. “He’s done a good job, but just a good job.”

It seems to be Todd Small’s weight class going forward, unless Austin Gomez returns to the mat without a possible medical redshirt.

So get used to these grind-it-out type matches from the Georgia native.

“He’s a guy that really needs to understand of imposing his will on guys,” Dresser said. “He let that guy hang on and squeeze him for four minutes. It was like watching paint dry. He’s got to separate himself.”