Talk About It: Mental health and its impact on academic performance 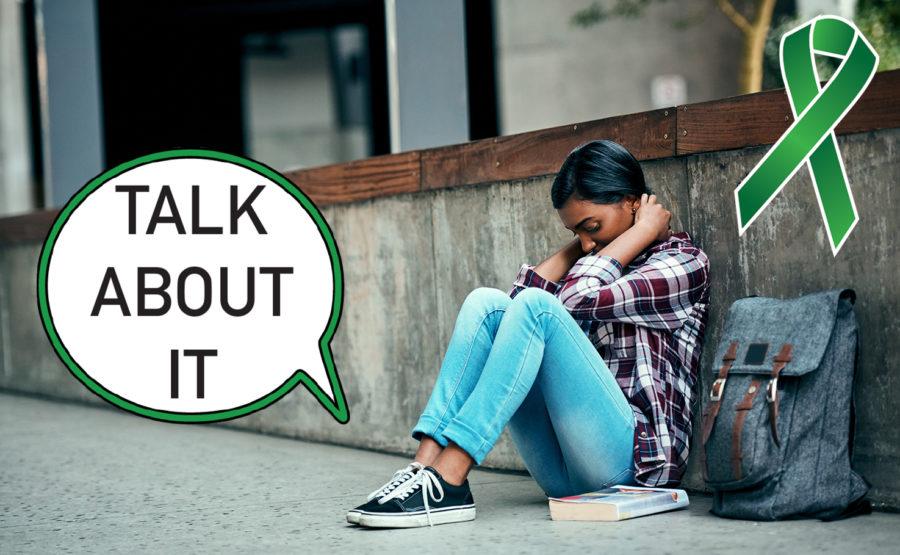 Poor mental health can correlate with academic performance, possibly presenting struggles for students such as lower grades and a lack of motivation.

Editor’s Note: This is part nine in our mental health series “Talk About It.” Sensitive content may follow.

Mental health can correlate with academic performance, which can present obstacles for students, especially during the busy time of final exams.

Charles Peasley, graduate psychology student, said a lot of research is finding an increase in mental illness disorders, specifically among the college population.

There is a week called “Stress and Health Week” in Toftness’ psychology course where the class discusses how stress can affect the body.

“So it’s a physiological reaction,” Toftness said. “It can be psychological in the beginning, but what ends up happening is your brain will literally turn that into chemicals that float through your bloodstream, and they affect your body. So during the stress and health week, I like to emphasize the fact that if you’re constantly stressed out and feeling anxious about things, your body changes its priorities.”

The body can react negatively to the stress hormones. Toftness said a stressed body thinks it is under attack because of the stress, which can cause problems such as an increased heart rate and weakened immune system.

“You sort of trick them into thinking that they’re in danger when you’re stressed out,” Toftness said. “That’s how they react to the stress hormones.”

Kay McClelland, junior in psychology, learns about what can affect a college student’s academic performance in her psychology classes.

McClelland said she’s currently learning how depression affects people. Depression can change the rapid eye movement (REM) cycle while people sleep, which can make them more tired than usual. People with depression may also experience a lack of motivation.

Someone close to McClelland had suffered academically because of his mental health. That person had always done well in school and was in the honors program at college. After the end of a long-term relationship, McClelland said she noticed changes.

“It started with kind of situational depression due to [the breakup], but then it lasted a long time; it lasted the entire semester,” McClelland said. “He had no motivation to do anything, he didn’t go to class and his GPA tanked a lot; he got a two-point-something, and that was really out of character. Then in order to stay in honors, he would have to get like a 4.0 the next semester, which is really hard, so he wasn’t in honors anymore because of that.”

After starting medication, he is doing well in school again, but it did negatively affect his academic performance and social life, McClelland said.

Toftness said when it comes time to talk about coping with stress, there are three things he likes to tell his students to keep in mind throughout Dead Week and Finals Week. Those three things include keeping habits or routines, exercising and “self-talk.”

“Keeping a routine is really important and staying on track with your life in every way that you possibly can, even if you don’t quite feel up to it,” McClelland said. “Just keeping that routine and going out of your way to find help and prioritizing self care.”

Toftness said the idea of self-talk is for people to be patient and kind to themselves while working on projects and studying for final exams, even if they’re not feeling great.

“Being understanding to yourself is probably one of the more tricky things to master in life,” Toftness said. “But it’s something that is extremely valuable to work on.”

When students are struggling academically, mentally or both, they should try to maintain routines, which include healthy habits like maintaining a balanced sleep schedule and focusing on the nutrition of one’s diet.

Another healthy habit is to exercise regularly, which can reduce one’s stress. Aerobic exercise, which includes running, dancing and other cardio workouts, can be beneficial when one experiences stress.

Peasley said he has recently discovered from research that using a sauna has the same benefits as aerobic exercise because of beneficial hormonal responses.

“It increases your prolactin by six times,” Peasley said. “It actually helps neurogenesis, which helps learning, so if you’re on a budget for time, the sauna might be a good cheat code […] I would say 15 minutes [in the sauna], no more than that.”

While there are various theories as to why the benefit of exercise causes the brain to function better, Toftness said they know it is true. People who routinely exercise are less stressed, less depressed and less anxious. Making time for exercise in one’s schedule can also provide time for them to take a break from studying and other class work.

Mental illness can affect people at any time, but it can intensify during the winter months. This intensity is often referred to as seasonal depression.

“So seasonal affective disorder, which is abbreviated ‘SAD’ […], it’s an interesting diagnosis for a number of reasons because it is something that can be fixed through entirely environmental interventions,” Toftness said. “By which I mean the whole thing goes away if you can change what you look at in the places where you hang out throughout the day. Now, that’s true for a lot of depression actually, but a lot of depression is also neurochemical, so that’s what makes SAD a little bit different from other kinds of depression, is that it can be treated by changing your surroundings.”

Those struggling with SAD can do things like using light therapy and taking a vitamin D supplement to help with the symptoms.

One’s social life can also be a factor in their mental health. If someone is depressed or experiencing anxiety from stress, they may isolate themselves from others. It might be difficult to reach out and talk to a friend or family member, but it can help those struggling to talk about how they feel.

“The important thing there is that there’s a dialogue, so checking your social media feeds does not constitute social interaction,” Peasley said. “It actually has the opposite effect. People show more depressive symptoms the more often they check social media.”

McClelland said it’s important to be kind to people all the time, but it’s especially important around this time of year and during Finals Week, as mental illness is real and can affect a lot of people.

“A lot of people are really stressed and not feeling their best,” McClelland said. “So keep that in mind, and be kind to people because you never know who is struggling.”