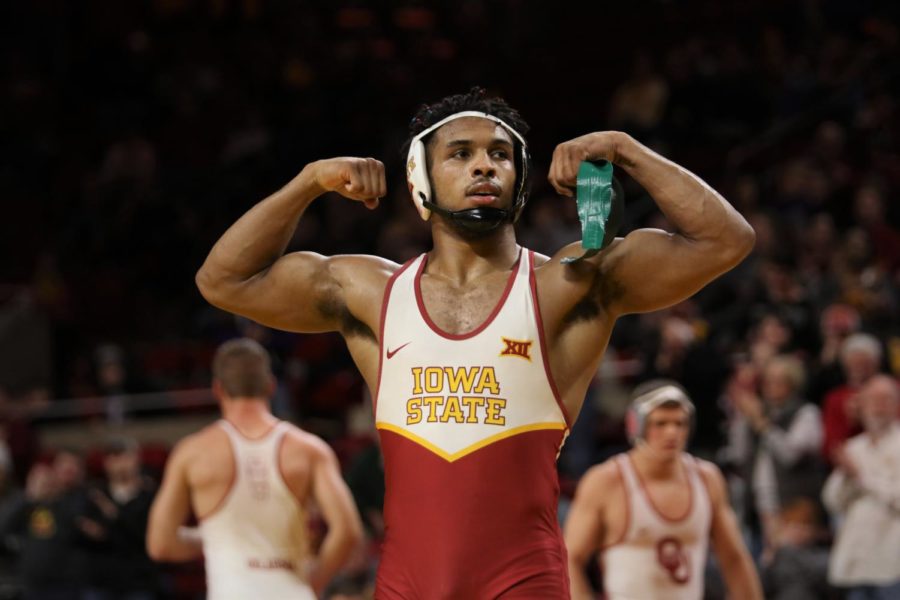 Iowa State's Sam Colbray celebrates after picking up a 14-4 major decision over Oklahoma's Kayne MacCallum at 184 pounds on Jan. 25, 2019.

After falling to in-state rival and current No. 1-ranked Iowa and taking a week off during Thanksgiving break, Iowa State wrestling is back and is making the trip out to Las Vegas for the Cliff Keen Las Vegas Invitational beginning this Friday.

The dual against the Hawkeyes saw the Cyclones go up against some of the top-ranked wrestlers in the country, but in Las Vegas, there’ll be top-ranked guys all over the place in a tournament that was described by coach Kevin Dresser as a “mini NCAA tournament” due to the high amount of high caliber opponents in every weight class.

The Cliff Keen Las Vegas Invitational (CKLV) will feature over 100 different ranked wrestlers combined throughout each weight class and will include 16 of the teams currently ranked in the top 25, which includes teams like Nebraska, Arizona State and North Carolina State.

One of the weight classes to pay attention to is at 157 pounds, where redshirt freshmen and newly-ranked No. 3 David Carr will look to prove himself to some of the other top guys at 157 after defeating then-No. 2 Kaleb Young during the Iowa dual.

Carr will be in some good company at the CKLV with a 157 class featuring No. 1 Hayden Hidlay of NC State, No. 2 Ryan Deakin of Northwestern and No. 8 Kendall Coleman of Purdue.

“I’m just taking it one match at a time, and when I get there, I’ll be ready,” Carr said about the challenges facing him at the CKLV.

One of the deepest weight classes in Las Vegas is going to be at 184, where No. 11 redshirt junior Sam Colbray will be representing Iowa State.

The bracket will feature 11 of the top 20 guys ranked at 184, with seven of them being ranked in the top 10, including No. 1 Zahid Valencia of Arizona State, No. 3 Taylor Lujan of Northern Iowa, No. 4 Trent Hidlay of NC State and No. 5 Lou DePrez of Binghamton.

A solid run in the 184 bracket can help Colbray bounce back after suffering an upset loss in a 4-3 decision against the then-unranked Nelson Brands during the Iowa dual, which dropped Colbray from No. 5 to No. 11.

Colbray also has a chance of matching up against Lujan, who met Colbray in the open 184 finals during the Harold Nichols Cyclone Open and where Lujan took home the open 184 title in a 7-5 decision over Colbray.

“I think it’s a very good opportunity; I think everyone’s, in my opinion, a very good competitor, and it’s close competition,” Colbray said about the opportunity presented for him. “To me, the weight is stacked and it’s who’s feeling the best that day, and I think I’m going to be ready on the days of competition; I wish them the best of luck, but I’ve been training and I’m ready as well.”

The CKLV will provide the Cyclones with an opportunity to see where each wrestler stacks up against some of the top guys in each weight class.

There are chances for redemption in the case of Jarrett Degen, Marcus Coleman and Colbray, who all lost in their respective finals during the Cyclone Open to their counterparts from Northern Iowa, as well as chances to bounce back following their losses from the Iowa dual.

There’s also the chance to be able to prove yourself in the case of Carr, who has garnered attention from around the nation after his win over Young and now has the opportunity to matchup with the only two guys above him in the InterMat rankings.

The tournament will be available to watch through FloWrestling, and the live stats and each bracket can be found through FloArena.