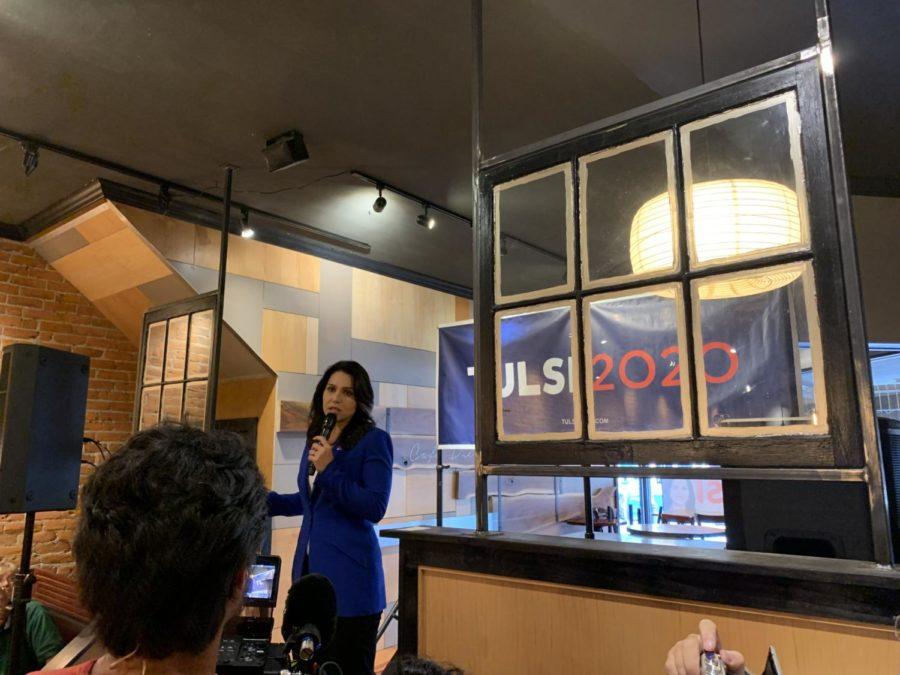 Rep. Tulsi Gabbard speaking to potential voters Saturday in Cafe Diem. Gabbard talked about her support for "Medicare for All" and the cost of America's foreign wars.

Three very interesting things happened on Dec. 19 in Tulsi Gabbard’s campaign for the Democratic nomination for the U.S. Presidency.

First, there was a huge story in The Washington Post about the so-called “Afghanistan Papers,” which reveal thousands of pages of confidential interviews with hundreds of key U.S. government officials telling how the Bush, Obama and Trump administrations lied to the American public about the prosecution of the 18-year U.S. war in Afghanistan—how successive US administrations manipulated data about the war to paint a much rosier picture of U.S. and Afghan government achievements throughout the conflict.

The story should suck up a lot of oxygen over the next few weeks, and it is one that should produce some unusually positive coverage for Tulsi, given that the issue of the failures of U.S. military interventionism overseas has been the primary focus of her campaign. The second interesting thing is the story has the potential to tie into another story involving a management consulting firm called McKinsey & Company that performed confidential contract work in Afghanistan and Iraq.

The reason McKinsey could be relevant to Tulsi’s campaign is that one of her main rivals for the nomination, Pete Buttigieg, happened to work for McKinsey from 2007 to 2010. Pete has indicated that his stint with McKinsey involved working on “war zone economic development to help grow private sector employment” in Iraq and Afghanistan.

In plain language, Pete appears to have been part of broader effort by the U.S. government to transform Afghanistan into some sort of a mini capitalist democracy—not unlike the silly U.S. plan to create a Jeffersonian democracy in Iraq.

Now, there may be nothing to the connection between the first and second stories. However, during Tulsi’s town hall on the evening of Dec. 9 in Nashua, New Hampshire, it is curious that Tulsi specifically mentioned McKinsey in referencing how most of the hundreds of billions of U.S. taxpayer dollars that have been spent in Afghanistan have not gone to fight terrorism but rather to enrich U.S. defense contractors such as the “McKinsey group.” She very slyly slid in McKinsey and moved on.

Few in the audience probably even noticed the dig at McKinsey, but you can bet that at least one good reporter caught it and will be doing some follow up investigating and may piece together a story that raises further questions about Pete’s connection with McKinsey. Some questions about this association have already been raised by Elizabeth Warren, and she might be tempted to expand this line of attack against Pete in the next Democratic debate on December 19.

Strategically, a public escalation of tensions between Warren and Pete, would be advantageous to Tulsi, but only if she stays out of the fray. Given how she has been portrayed by Hillary, the DNC, the media and other candidates such as Kamala Harris (who’s gone now, by the way) in the last debate, Tulsi can imagine the kind of coordinated personal attacks that might be lobbed her way in the next debate. The chances of this occurring significantly rise should Tulsi get a heavy dose of positive media exposure this week following the Afghanistan Papers story. Such exposure could well highlight Tulsi as the only wise, omniscient and trustworthy candidate on US foreign policy, notably with regard to use of U.S. military power.

Better to sit back and observe how Warren, Pete and the others handle the questions related to the Afghanistan Papers and US foreign policy, in general. Take notes from the sidelines. That is my guess as to why Tulsi late in the evening on Dec. 9 sent out the following tweet:

“For a number of reasons, I have decided not to attend the December 19th “debate” — regardless of whether or not there are qualifying polls. I instead choose to spend that precious time directly meeting with and hearing from the people of New Hampshire and South Carolina.”

That was the third interesting thing on Dec. 9.

Yes, Tulsi realized her chances of qualifying for the debate by Thursday (Dec. 12) were slim anyways, so maybe she figured she might as well exit on her own terms and just continue on with her steady ground game in New Hampshire. Perhaps she figured what’s the point anyways, given that debate moderators have been unwilling to allow her equal time to speak and get her message across, as originally promised by the debate sponsors.

In other words, what’s the point if the odds are stacked against you on the debate stage. I imagine she must be considering whether the debates are hurting her more than helping.

One thing’s for sure… Tulsi’s decision not to participate in the debate, regardless of whether or not she qualifies, has been made thoughtfully and strategically. Tulsi is a soldier. She has a military mind, and so she has likely scanned the battlefield and concluded this might be a good time to pause, re-supply, re-arm and watch the battle unfold from the high ground rather than plunging into the fight, as our government has thoughtlessly, stupidly and repeatedly done over the past two decades.