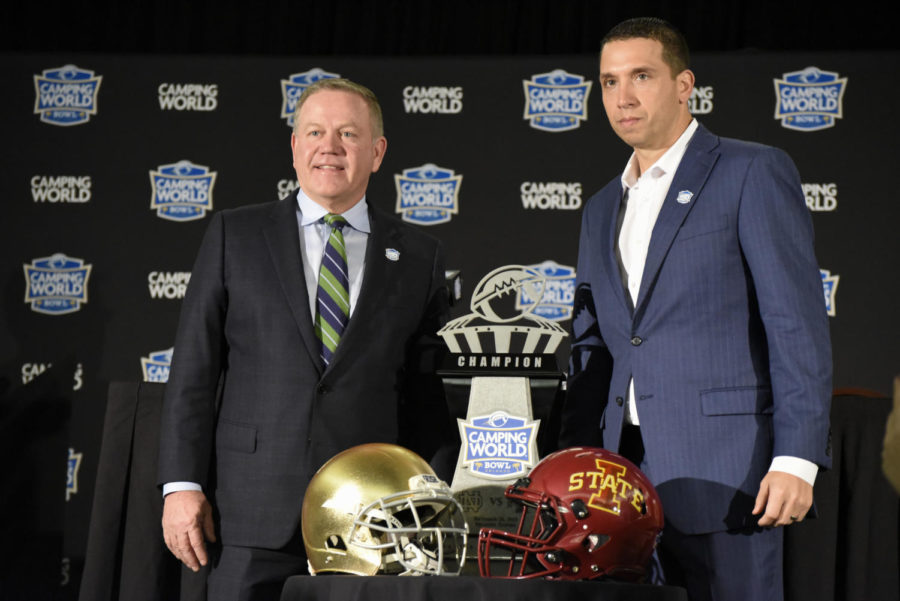 Iowa State Head Coach Matt Campbell and Notre Dame Head Coach Brian Kelly speak to the media ahead of their matchup in the Camping World Bowl on Dec. 28.

This game will be close. That is about all I know for certain.

So when everything comes down to the game, I believe Iowa State will falter on the big stage but it will be competitive from start to finish.

Details will be key for the Cyclones to win and based on what we have seen so far this season, Iowa State has a tendency of hurting itself in big moments. Those lack of details-no matter how small they seem-have cost the Cyclones a chance to win time and time again this year.

Notre Dame will take advantage of the mistakes and will prevail in the end.

This is an opportunity for Iowa State to show itself on the national stage and beat one of the greatest teams in college football history — and the stage won’t be too big for the Cyclones. But Notre Dame could be. The Fighting Irish are 10-2, angry that they aren’t in a better bowl game and with an advantage in size and strength. In a surprise pick, though, I’m gonna go with the Cyclones to pull off an upset. I fully expect this game to go down to the wire — with a late Iowa State touchdown being the difference. Honestly, I just want a close game so the stories can be good.

I don’t think these teams are as far apart as their records and rankings would dictate. That being said, Notre Dame is a better team and that will show on Saturday. Iowa State will need to rely on the passing game like it often does and I think Brock Purdy will keep them in it, but the Fighting Irish are a more talented overall team. They also have Ian Book. Purdy is arguably as good if not better than Book, but Book is still one of the better quarterbacks in the nation and has a better supporting cast around him. The game could go either way if the Cyclones can stop Book, but I don’t think they will. Notre Dame ends the Cyclones’ season on a low note.

This goes against the grain of both Vegas odds and many sports pundits, but I think Iowa State will pull out a win in Orlando. The Cyclones have a 7-5 record, but as has been pointed out by Notre Dame coach Brian Kelly and others that does not reflect the season the Cyclones played. They fell just a few points short in four of their five losses and an upset win against Notre Dame is more than plausible with a strong passing game. Whether the Cyclones pull out a win or fall just short, this first-time matchup between two midwestern teams playing in the tropics should be close.

Doubling their score and leaving them in the dust, Notre Dame has this game hands down. The Cyclones have a habit of choking when they are going up against perceived equals — just re-watch the most recent Iowa v Iowa State game — and they are not equals compared to Notre Dame. Yeah, the Cyclones can be an aggressive team, but the Fighting Irish will attack early and they will attack hard. Holding the pressure on the Cyclones, the Fighting Irish will tear the hopes and dreams off of them, leaving them with nothing but their holiday gifts to their name.