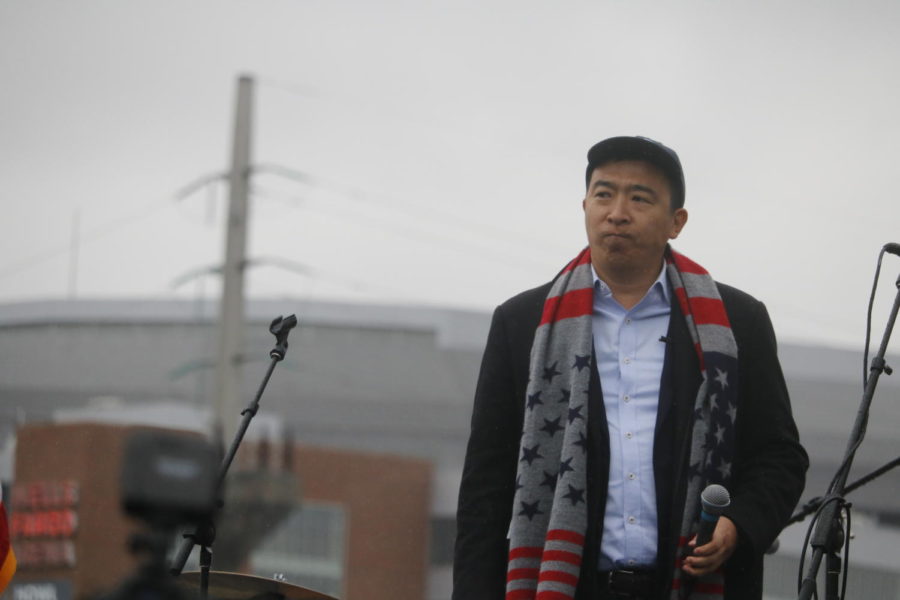 Andrew Yang speaks at a campaign rally Nov. 1 in Des Moines. After his remarks, he led rally attendees in a march to the Iowa Democratic Party's Liberty and Justice Celebration in Wells Fargo Arena.

Joining his fellow Democrats in undertaking bus tours of Iowa, Andrew Yang is going on a tour around Central and Eastern Iowa for his “A New Way Forward” bus tour.

Yang will visit Ames and participate in events throughout the city Thursday.

To start off the day, Yang will be present at his campaign’s Ames office opening at 10:30 a.m. Yang’s Ames office is located at 219 Main St.

At noon, Yang will compete against J.D. Scholten in a head-to-head basketball game. This event is scheduled to take place at the Ames Community Center located at 515 Clark Ave.

“The basketball scrimmage is an opportunity for Iowans to see Andrew Yang and his friend, J.D. Scholten, as people — not just candidates — who enjoy sports like many of us,” said Yianni Varonis, a spokesperson for the campaign. “Together, they are looking to have fun interacting with Ames residents while playing their favorite sport.”

For the last event of the day, Cyclone basketball fans can see Yang and “two special guests” at the Cy-Hawk game at Hilton Coliseum.

As of Wednesday, Yang is sixth in polling of likely Iowa Democratic caucusgoers at 2.5 percent support, according to the RealClearPolitics polling average. That is four percent under fifth-place candidate Amy Klobuchar. Pete Buttigieg leads with 22.5 percent support, followed by Bernie Sanders with 19.3 percent, Joe Biden with 18 percent and Elizabeth Warren with 16.3 percent.

Despite being sixth in the polls, Yang’s Iowa tour will see him continuing to have conversations with people across Iowa. Yang is “expanding the electorate, building a movement of everyday people across the political spectrum,” according to a press release about his tour.

Varonis said Yang will be in Ames to listen to the residents.

“Andrew Yang will meet with ISU students on Thursday to listen to their priorities and share his vision for a new way forward that puts humanity first, including the climate crisis and student loan debt,” Varonis said.