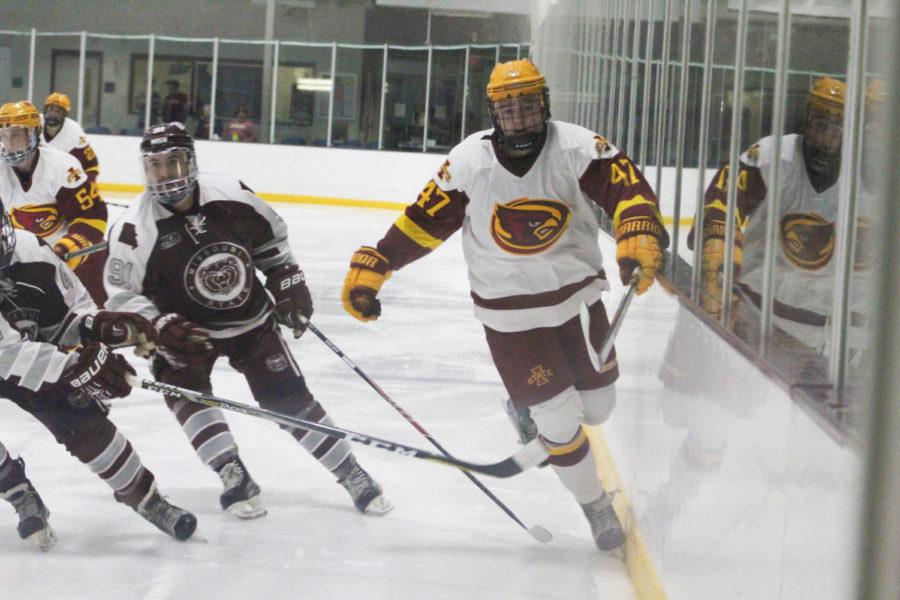 Cyclone goalie Nikita Kozak and the Cyclone blueliners did not allow any of the 35 Illinois shots to reach the back of the net. The Cyclones recorded 32 shots of their own.

“We had a lot of support from the defensemen and forwards, really protecting the house tonight, made my job easy,” Kozak said.

This marks his fifth shutout of the season.

“He’s a workhorse. He almost never fails,” Pearson said. “He’ll save everything he’s supposed to save, and then he’ll save us a few times when we let him down too.”

The Cyclone penalty was once again solid, killing both of the Illinois power plays. This helped the Cyclones maintain the 0-0 deadlock and then keep their 1-0 lead.

After a scoreless first period, Pearson started the scoring in the second period at 10:42.

A scramble occurred in front of the Illinois goal. Pearson found himself in possession of the puck and got it passed Illinois goalie Jake Barnhart.

“We had guys crashing to the net looking for those second and third opportunities,” Kozak said. “I think that [was] a big key to our success tonight.”

One of the opportunities Kozak alluded to was Pearson’s goal. His initial attempt hit Barnhart, but his second effort trickled in. The unconventional goal gave the Cyclones a lead which they would not relinquish.

“It was kind of wonky,” Pearson said. “The other center, for some reason, decided to win it back towards his goalie, which is fairly rare. You don’t often see that, so I just jumped the play.”

The goal is the freshman’s second of the season.

The Cyclones took that 1-0 lead into the third period. For a majority of the third period, the score remained the same until Cyclone defenseman Joey Marcuccilli doubled the lead at 16:31. Ray Zimmerman circled behind the Illinois goal and fired the puck to an open Marcuccilli near the edge of the zone.

“We had to work for those goals,” said coach Jason Fairman. “That’s probably how we’ll have to score all year.”