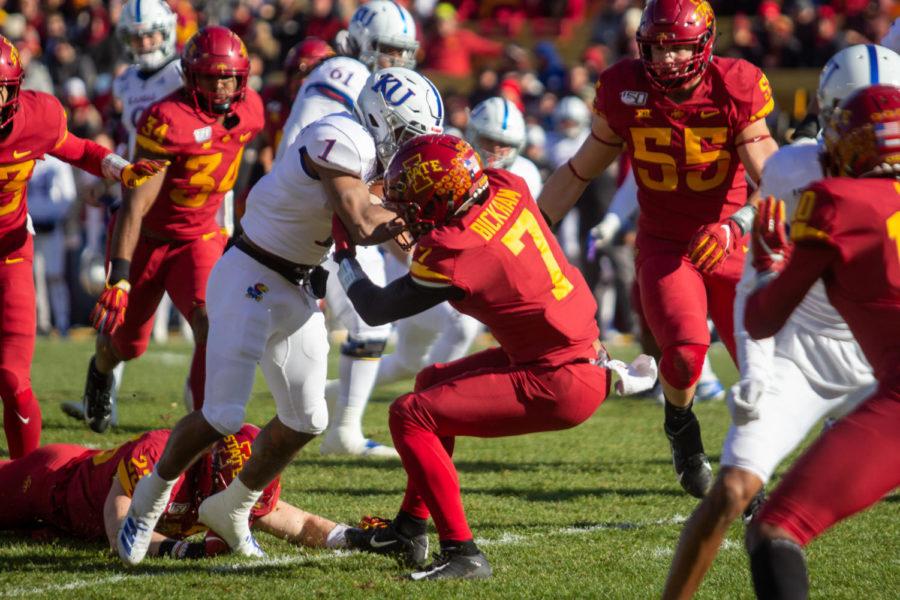 Iowa State was its own worst enemy Saturday.

The Cyclones struggled to get out of its own way for much of the game — there were dropped passes, poor communication and plenty of missed opportunities to make stops defensively against the 3-7 Jayhawks.

If Iowa State expected an easy win to end its home schedule, it could not have been more mistaken. The Cyclones escaped with a 41-31 win over the Jayhawks, but nothing came easy.

Kansas showed up with fight belying its 1-6 Big 12 record and took the lead on two occasions in the second half — both on touchdowns in which a receiver beat senior safety Braxton Lewis deep.

The Jayhawks consistently were able to move the ball on Iowa State’s defense, going for 493 total yards on the day — four more than Iowa State’s 489. In particular, the Cyclones struggled to stop Kansas running back Pooka Williams, who ran for 154 yards on 19 attempts and two receptions for 52 yards and a touchdown in the passing game. His reception in the end zone brought Kansas within five points at 21-16 down — and then a Brock Purdy interception off of a tipped pass gave the Jayhawks the ball in Iowa State territory.

Anthony Johnson said the secondary fell victim to a lack of attention to detail in the second half.

Campbell pointed to the secondary’s youth as an issue.

“We are so young in so many areas,” Campbell said.

The struggles on the defensive side of the ball were prevalent — but while the offense was consistently scoring, there were still moments of uneven play and silly mistakes, as Campbell made sure to point out after the game.

In the first half, the Cyclones shot themselves in the foot with offensive penalties. On one drive, the offense accounted for 35 yards worth of penalty yardage alone, and it left Iowa State trying to fight against a second and 28 at its own 11.

In the second quarter, dropped passes popped up that Campbell said he hadn’t seen all year.

“That’s the disheartening thing — we left a lot out there today,” Campbell said.

The drops, penalties, a turnover and more left the Iowa State offense wanting more despite putting up 41 points.

On a day in which many expected a stroll for Iowa State, instead the Cyclones left the game with more questions to answer than before kickoff — despite the game involving multiple broken records by Purdy, including marks for single-season passing yards and single-season total offense.

It was that kind of game for the Cyclones, who now sit at 7-4 heading into their final game of the season — a road trip to Kansas State on Nov. 30.

“We had a turnover, we didn’t start fast, didn’t pick up a fourth-and-one at the 40,” tight end Charlie Kolar said. “We just gotta pick up the little things like that.”