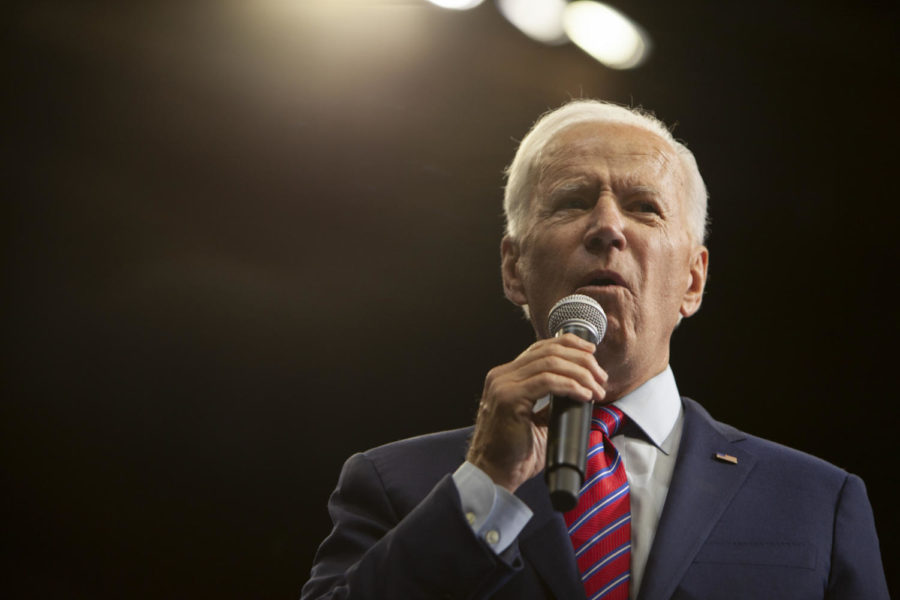 Thirteen Democratic presidential candidates took the stage at the Iowa Democratic Party’s “Liberty and Justice Celebration” late Friday in Des Moines, Iowa — cheered on by thousands of supporters in stadium seating and on the floor of the Wells Fargo arena.

Campaign teams and voters lined the streets of downtown Des Moines to bring attention to and gain support for their favored candidate.

“Having rallies is about building a movement, it’s about connecting with voters, showing folks how excited we are about Warren’s plans and her vision for this country,” said Brian Gregory, a Sen. Elizabeth Warren campaign organizer in East Waterloo, Iowa.

Not only were Iowans present at the event, but also many people traveled more than hundreds of miles to support their candidate.

“We go all over the country to volunteer in whatever way we can,” said Carole Callaghan, a volunteer with former Rep. Beto O’Rourke’s campaign who spoke to the Daily before O’Rourke announced he was dropping out of the race that afternoon.

The Liberty and Justice Celebration is the most attended and last big Iowa Democratic Party event before the Feb. 3, 2020, caucuses.

“We are working to make sure that this upcoming caucus is the most successful and accessible caucus that has ever been conducted here in Iowa,” said Tom Perez, chair of the Democratic National Committee.

Iowa is at the forefront of deciding how the Democratic primary plays out, with the caucuses playing a decisive role in the outcome of the race for the nomination.

During the celebration, each candidate was allowed 12 minutes to speak to highlight their goals, accomplishments and try to rally more support.

“I am here to launch the era that must come next,” Buttigieg said.

Former Vice President Joe Biden spoke next, discussing his past experiences with foreign policy and what he said was his fight against the National Rifle Association.

“The next president is going to be commander in chief of a world in disarray, there’s going to be no time for on-the-job training,” Biden said.

Businessman Andrew Yang “did the math” and spoke out about what he said were his successes in the race so far and the importance he said Iowans have as voters.

“Each Iowan in this room is worth 1,000 Californians, and when I look around this arena tonight I do not just see 14,000 Iowans, I see 14 million Californians,” Yang said.

Warren brought up why she said she believed the United States needs “big structural change” by discussing the companies that have “taken from Americans.”

Sen. Kamala Harris said those present at the event should unite in order to “fight for the best of our country and democracy” and come together to “defeat Trump.”

Sen. Bernie Sanders donated $20,000 from his campaign to the Iowa Democratic Party. The money originally would have been used to buy Sanders’ supporters tickets to attend the event. Instead, the Sanders campaign hosted a watch party for his supporters off-site of the Liberty and Justice Celebration.

Sanders spoke on health care and education, along with the climate crisis.

“Saving the planet is not a debatable issue,” Sanders said.

Several candidates highlighted their connections to the Midwest and Iowa.

Sen. Amy Klobuchar said she can “see Iowa from my porch” in Minnesota. Buttigieg also spoke of his proximity to Iowa.

“My office is six hours down I-80, here in the Midwest,” Buttigieg said.

The event finished late in the night, with the arena largely emptied out as Gov. Steve Bullock spoke last of all the candidates.

No matter who makes it to “the mountain top,” Democrats will come together to support him or her in the 2020 election, Perez said.