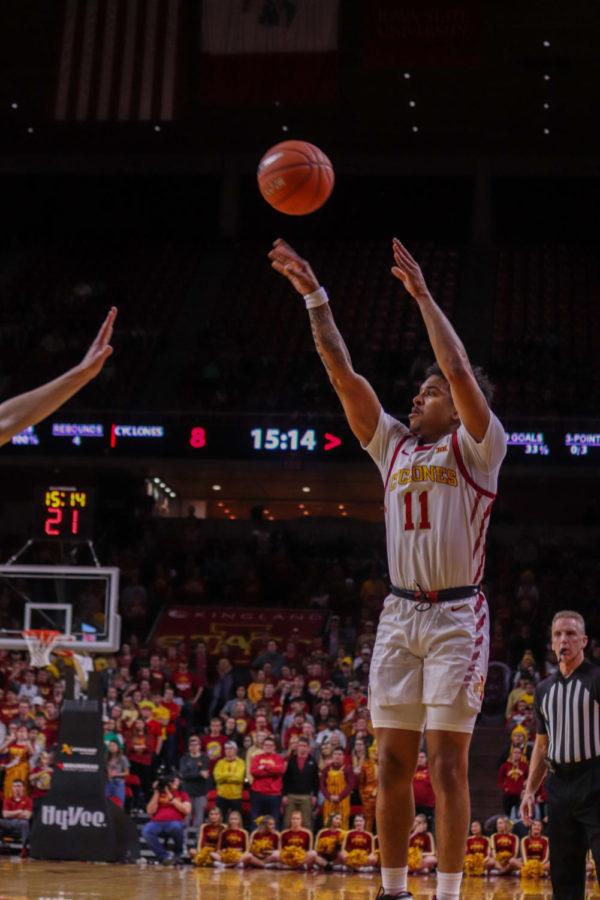 In a blowout victory over Southern Mississippi to begin the Battle 4 Atlantis, Iowa State saw similar trends in its three-point shooting and Tyrese Haliburton’s unselfish play.

Even though Iowa State has won two straight games by more than 15 points, the Cyclones have not played to their full potential yet — particularly from beyond the arc.

The Cyclones have had the luxury of playing lower-level competition in its last two games, but the three-point shooting issues are a problem nonetheless for Steve Prohm and his squad.

“Some [shots] tonight I thought were worse than the other night though; I thought we forced a couple tonight and some you gotta make,” Prohm said.

The Cyclones may be struggling from three as of right now, but Prohm sees plenty of reliable shooters on the roster who just haven’t found a consistent night from behind the arc.

Prohm said he believes Rasir Bolton, Prentiss Nixon, Haliburton, Tre Jackson and Caleb Grill are all mid-30 or better three-point shooters, but in an early sample size, it hasn’t been the case.

One of those shooters, Nixon, who hit two of Iowa State’s five three-pointers Tuesday night, said the Cyclones will continue to improve from three, but the amount of games the Cyclones have played could also play a part in the early struggles.

“I don’t think we are a bad shooting team, I just think we are missing good looks and open shots,” Nixon said. “That just comes with repetition and being in the gym. This is game four; they’ll start to fall.”

Nixon said once Iowa State becomes consistent, then all other aspects of the game with fall into place.

Haliburton attempted only two three-point shots Tuesday night and made one of them, but said he feels the rest of his teammates got good looks throughout the night and the shots just would not fall.

Haliburton said he doesn’t have a definitive answer as to why Iowa State is having trouble from three-point range over the last two games but knows that the Cyclones will continue to work.

“To be honest with you, I didn’t even feel like we shot that bad, but looking at [the box score], obviously we didn’t shoot too well,” Haliburton said. “We spend a lot of time in the gym and have a lot of faith in each other, and eventually they’ll fall.”

Solomon Young produces near the basket

Shooting from three has been a lingering issue for the Cyclones so far this season, but over the last two games, Solomon Young has had no problems getting his fair share of buckets.

The junior forward has scored 15 and 14 points in his last two contests and with an efficient stat-line.

Young has shot 10-16 over his last two games, and against the Golden Eagles on Tuesday night, his jump hook right in front of the basket proved to be an issue for the Eagles’ big men.

Young has started every game for Iowa State alongside fellow big man Michael Jacobson, and has shown his efficiency over Iowa State’s last two games. The junior will be looked to going forward as Iowa State begins to play higher-level competition, particularly with more size near the basket in teams like North Carolina and Seton Hall.

Once again, Haliburton did not light up the stat sheet with his points against Southern Mississippi, but instead focused on driving downhill toward the basket and looping passes through and over the defense.

Haliburton finished his night with nine assists. Prohm said Haliburton is the Cyclones’ best option when plays need to be made and open looks need to be created for others on the floor.

“He’s our best playmaker,” Prohm said. “He needs to be our playmaker but also needs to be aggressive, and you know we need him to make shots for us too.”

Prohm said Haliburton needs to get better at creating rotation in the defense and might add more to the offense to put Haliburton in the middle of the floor more often.

The sophomore guard has 32 assists and six turnovers on the season, good for a 5.40 ratio.

Haliburton is the only player in the nation with multiple games with at least 12 points and nine assists.

Haliburton said his coach’s attitude about him crashing toward the basket and finding open teammates has been working but said he needs to continue to improve how often he attacks.

“I think we are at our best when the ball is moving and not sticking,” Haliburton said.