Review: “The Lighthouse” is a manic masterpiece 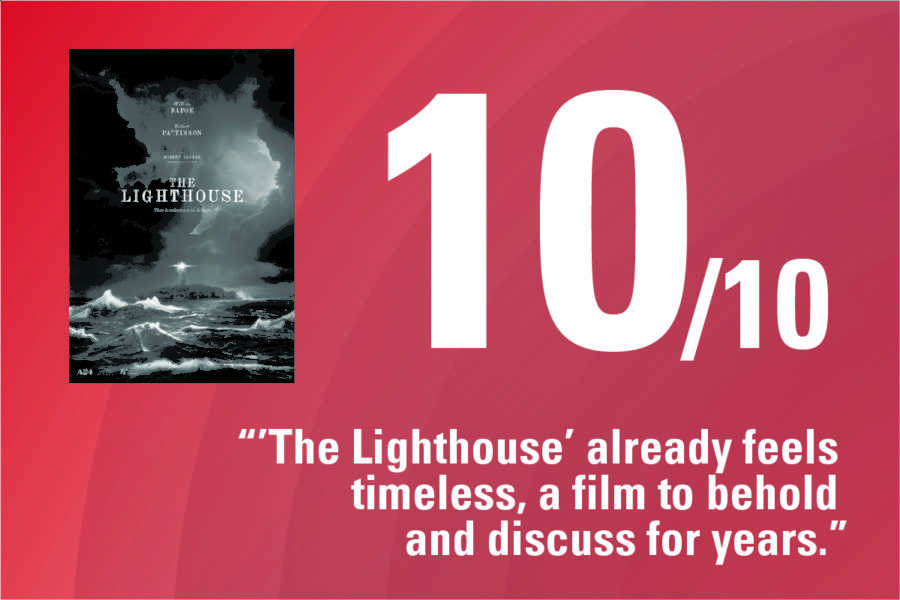 With its outstanding acting, directorial choices and timeless quality, "The Lighthouse" makes for an unforgettable film.

Whether or not one appreciates or considers Robert Eggers’ “The Lighthouse” to be a “good movie,” it’s not a movie viewers can easily forget.

It’s artsy and ambiguous without crossing into muddled pretentiousness, despite being infinitely open-ended. It’s disturbing and tension-filled, but wants you to smile at it. It offers two career performances from Robert Pattinson and Willem Dafoe — the kind you can’t imagine any other actor pulling off.

Its imagery, symbolism, setting and thematic tools eat away at you long after you leave the theater. It doesn’t cut corners, it takes risks, it’s not what you would expect based on the film’s trailers or from watching Eggers’ last film, “The Witch.” It’s the kind of film that demands multiple viewings, but with enough to offer on the surface to not require them.

The film begins with the bleak arrival of two lighthouse keepers on a distant island and unfolds without anything to hold the viewers’ hands. Almost immediately, the keeper’s shift at the lighthouse unfolds into a tense, unnerving, hilarious and hallucinatory journey.

The first layer to “The Lighthouse” to unpack is the film’s presentation. The black-and-white, shot on 35 mm film uses a 1.19:1 aspect ratio and is accompanied with a doomful orchestral score. The film dawns the atmosphere of old school silent horror movies.

As the film progresses, these directorial choices prove to be enhancements and not gimmicky. Removing color adds to the old-timey sailor dialect delivered by the characters, and lighting is used to help convey emotion in the strong character moments throughout. The film’s aspect ratio serves as a reminder of the claustrophobic setting. The score is unique and synonymous with the most memorable moments of the film. These directorial elements working in a modern movie provide an experience unlike anything before it.

In today’s digital age of film, it can be hard to grasp the reality of an environment. From the lighthouse’s creeky cabin to the crashing waves, chirping seagulls and intense thunderstorms, it’s easy to be immersed with the level of attention put into the environment’s authenticity.

The authenticity carries over to the characters. Thomas Wake (Willem Dafoe) has a sailor’s accent so thick that at first he’s difficult to interpret. Eggers’ wrote the dialogue after researching real journals of lighthouse keepers of the 19th century. Dafoe’s performance is so convincing that even as an appreciator of Dafoe’s work throughout many films, it’s easy to forget there’s an actor behind the character. His dialogue and demeanor is masterfully delivered, and much of the entertainment value in “The Lighthouse” is just watching Dafoe act.

Protagonist and one at odds with Wake is Ephraim Winslow (Robert Pattinson), whom the viewer sees evolve and reveal himself throughout the film. Winslow isn’t accustomed to the sea life like lifelong sailor Wake is, and comes to the lighthouse reserved and entitled with kept secrets. Pattinson is able to present his character in many different lights, as the character opens up personally and dips into insanity. While Dafoe brings a more entertaining and arguably more memorable performance, Pattinson is more complex, nuanced and erratic.

As their time at the lighthouse extends, the two keepers’ relationship and mental states collide. There’s a lot to examine in each character’s personality and how their personalities mix together in their unfortunate situation.

A lot of the character interaction is intentionally funny, which comes unexpectedly in a movie trying to maintain a harrowing atmosphere. However, the comedic elements work, and while this choice and many other choices made in the film end up sacrificing a fully horror experience, it only adds to the film’s manic charm and bizarre insanity. There’s nothing else like “The Lighthouse” and it’s hard to draw any significant comparisons.

With unreliable points of view and an unconventionally paced plot, time spent watching the film is hard to gauge for the viewer, much like the characters’ own sense of time. Even on a second watch, the film’s sense of time is disorienting.

Eggers clearly intended this film to be interpreted in any way the viewer sees fit, not giving many signs to point in a specific direction. “The Lighthouse” is packed with enough strong dialogue, imagery, symbolism and plot details to piece together something profound for yourself, but the film doesn’t feel like it has one underlying message begging to be analyzed and discovered. For its long-lasting impact, along with some of the best performances and direction ever in film, “The Lighthouse” already feels timeless, a film to behold and discuss for years.