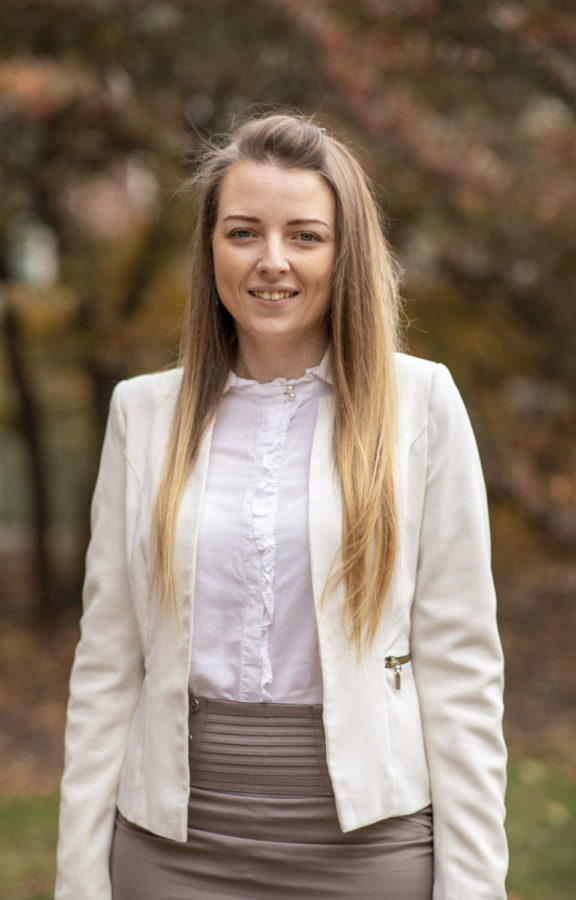 Aleksandra Badaczewska-Dawid, who is the co-author of 13 scientific papers and has 300 citations in peer-reviewed journals, has joined the Potoyan Lab at Iowa State on the Bioscience Innovation Postdoctoral Fellowship.

Badaczewska-Dawid is from the University of Warsaw in Poland and now works as a postdoctoral research associate in the chemistry department at Iowa State.

“Iowa State is a good place, especially Potoyan’s lab is a good one,” Badaczewska-Dawid said. “The people inside this lab are very nice and they are great scientists also. Daily work in such a team is motivating and exciting. I think I fit to this lab and this lab fit to me so I’m very happy to be here and I’m hoping for a great scientific research.”

Badaczewska-Dawid is recognized for the co-development of a deeply coarse-grained, low-resolution protein model known as the Single United Residue per Pre-averaged Secondary Structure (SURPASS model).

The model’s reduced size enables more efficient and highly accurate modeling of large-scale proteins, according to a College of Liberal Arts and Sciences news release.

Davit Potoyan, an assistant professor of chemistry, is the principal investigator in the Potoyan Lab Badaczewska-Dawid works in.

“So the area that we work in is computational biophysics,” Potoyan said. “So we use computational tools to get out how biomolecules interact and we look at how biomolecules are organized inside cells, how they regulate biochemical reactions. Basically we look at these processes on several scales from molecular to cellular to somewhere in between.”

After taking an interest in Badaczewska-Dawid’s research and publications, Potoyan reached out to her by email. They communicated back and forth about Badaczewska-Dawid possibly coming to the United States to work with Potoyan and his team in the lab.

Potoyan said after some email exchanges, they arranged for Badaczewska-Dawid to visit the United States from Poland.

“I was nicely surprised when professor Potoyan wrote to me after he read my paper about our coarse-grained SURPASS model developed in the professor Kolinski lab,” Badaczewska-Dawid said. “Then I was just in the middle of finishing my Ph.D. thesis and I didn’t decide yet where I should go for postdoc. I had some other options, like New York, but I’m really glad being here in Ames at [Iowa State]. The project we are working on, liquid-liquid phase separation of proteins, is very interesting and it is one of the most exciting topics in bioscience right now.”

Badaczewska-Dawid said Potoyan’s project sounded interesting and decided to join him. She said she’s pleased with her decision because Potoyan is a great scientist and Iowa State is a really nice place.

“I would say this kind of research is really driven by talented postdoctoral scientists like [Badaczewska-Dawid],” Potoyan said. “She’s very independent, she comes up with all the intermediate steps, so all I did basically, I give her the big picture, this idea, […] she really carries the project so in that sense she’s the driving force.”

Badaczewska-Dawid is also a graphic artist and has created 3D images of protein models she develops. Some of her images have been featured on covers of prominent medical journals.

“I think my great hobby is graphic design and sometimes it is also related a bit to science because I have prepared the pictures for the majority of publications that I was co-authored,” Badaczewska-Dawid said. “Also a few times I prepared pictures that won a cover art for scientific journals. I am very proud of that and it gave me a lot of joy. I like pretty things and I believe that smart visualization helps to understand science, so if I can make nice picture I would love to do it.”

The fellowship awarded to Badaczewska-Dawid was established by the Roy J. Carver Charitable Trust of Muscatine, Iowa, to “support biomedical research programs on the cusp of developing scientific breakthroughs that could advance human health.”

Badaczewska-Dawid was one of 40 applicants for the fellowship, which provides financial support and allows the opportunity for collaboration with Iowa State researchers.

“I am very grateful to Roy J. Carver Charitable Trust and College of Liberal Art and Science[s] for trust and giving me the opportunity to work with great scientists at [Iowa State],” Badaczewska-Dawid said.

“We would like to become important players in this new field, field of protein nucleic acid face separation,” Potoyan said. “This is where I’m focusing all my efforts; all my three postdoctoral scientists as well as graduate student [are] working on different aspects of this. This face separation of biomolecules is a huge deal — it can really change the way we understand biochemistry, biology, because it offers you ways in which biomolecules can be regulated and organized inside cells. That’s what drives all life processes.”