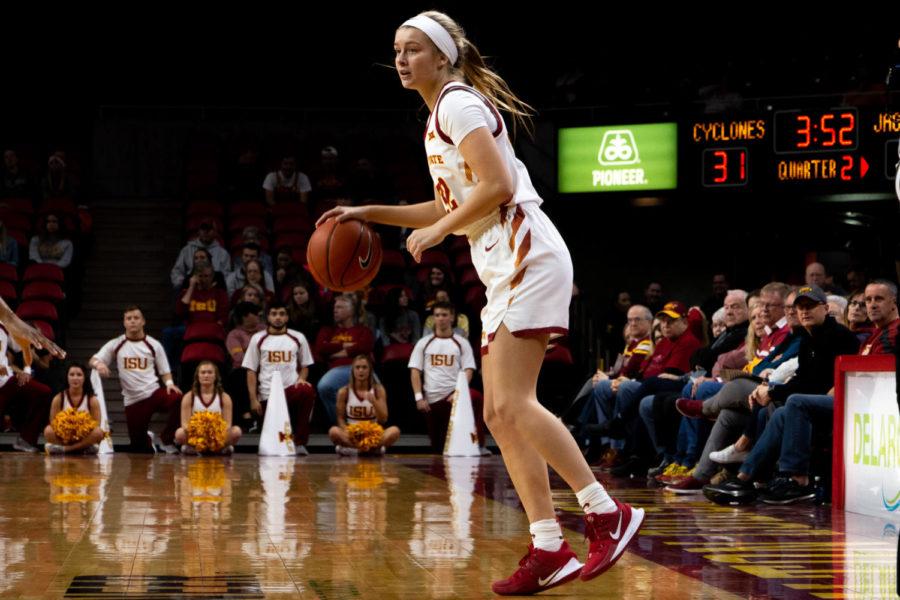 Iowa State guard Maggie Espenmiller-McGraw dribbles the ball in the corner against Southern on Nov. 7. The Cyclones beat the Jaguars 69-36.

Coming into this year, the Iowa State women’s basketball program had never signed a top-10 recruiting class nationally, according to ProspectsNation.com.

However, it was announced Wednesday that the Cyclones’ recruiting class of 2020 ranked seventh nationally.

The Cyclones signed four recruits — Lexi Donarski, Kylie Feuerbach, Aubrey Joens and Emily Ryan — all of whom are from the Midwest.

“It’s a great day for us,” said Iowa State head coach Bill Fennelly. “They fit exactly what we needed and they fit what this program is about.”

All four of the Cyclones’ commits are guards. The Cyclones were focused on recruiting guards in the class of 2020, according to Fennelly.

“Our goal in the 2020 recruiting cycle was to add perimeter players and we did exactly that with this group,” Fennelly said in a press release.

Donarski, a La Crosse, Wisconsin, native, is the highest-rated recruit that Iowa State has ever signed. She is the 12th best overall prospect, according to ESPN. Donarski has been a three-year starter at Aquinas High School, where she led her team to a 82-2 record, back-to-back state championships and earned the La Crosse Tribune Player of the Year award twice.

Feuerbach is the 77th best prospect overall, according to ESPN. While playing for Sycamore High School in Sycamore, Illinois, Feuerbach has scored 1,611 points, which is the most points in school history. She averages 20.5 points per game to go along with grabbing an average of 7.3 rebounds. Feuerbach has been named to the All-Conference First Team three times and won the Nike 2018 EYBL tournament — as a part of the All-Iowa Attack — which Joens also played for.

“I’m really excited for her, this is a great place for her,” [Ashley] Joens said. “Playing with her is going to be exciting.”

Aubrey has led Iowa City High to a 66-6 record in the past three seasons and she is the 54th overall prospect according to ESPN.

Rounding out Iowa State’s recruiting class is Ryan. Ryan plays high school basketball for Central Plains High School in Claflin, Kansas, where her team has won three straight championships and has a 79-0 record in the past three seasons.

Ryan plays point guard and has averaged 30.6 points, 5.5 rebounds, 6.1 assists, 5.6 and 1.5 blocks per game. Ryan was the Gatorade Player of the year in 2018, was the consensus player of the year in Kansas and 64th best prospect in the country, according to ProspectNations.com.