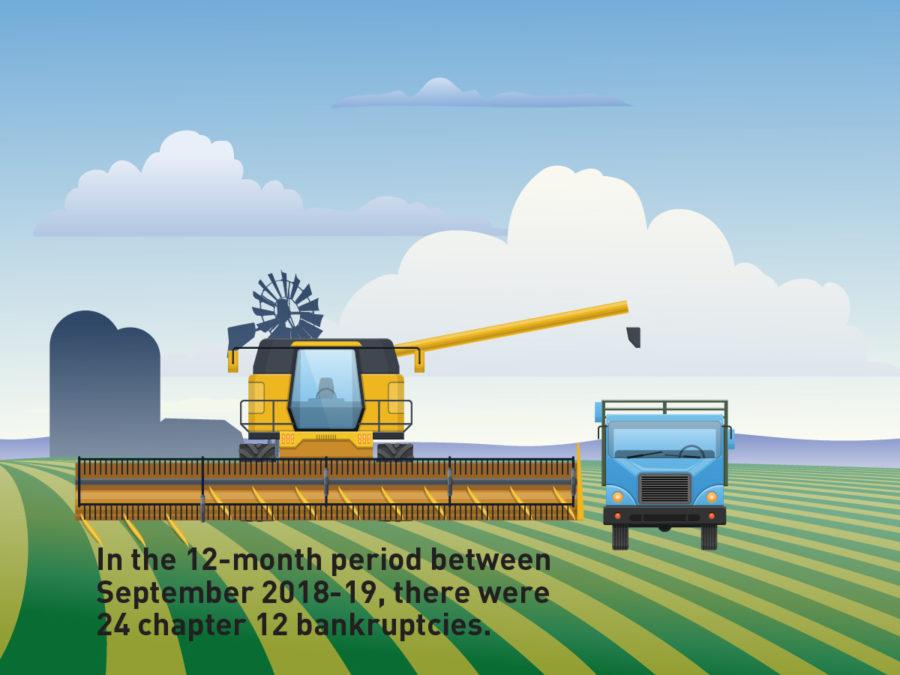 Farmers in Iowa have felt the effects of the ongoing trade war between the United States and China. Tariffs placed on products such as solar panels and agricultural products have negatively impacted farmers and their businesses.

The ongoing trade war between the United States and China has cost farmers significant profit losses and led to farm bailouts.

“[President Trump is] using the tariffs as an economic tool,” said Chad Hart, associate professor of economics at Iowa State.

Over the past 20 months, Trump and Chinese President Xi Jinping have instituted tariffs on multiple products, such as washing machines, solar panels, electronics and agricultural products. This has caused issues for workers in those fields, and Iowa farmers have received blows to their businesses. Soybeans are down $1.53 per bushel from where they were before the trade war began to $9.18 per bushel, for a decline of 14.3 percent.

There were 24 chapter 12 farm bankruptcies in Iowa in the 12-month period from September 2018 to September 2019. Chapter 12 bankruptcies provide “reorganizational advantages and financial relief specifically for family farmers in debt,” according to the American Farm Bureau Federation.

Jake Schneider, native Iowan and former employee at Monsanto, an agrochemical company, said he has kept up with the trade war since its start.

Along with his own background in the agricultural industry, Schneider has deep roots in farming, with his grandparents being farmers themselves.

“The uncertainty of it all is driving prices down,” Schneider said. “Cheap goods are great, but jobs are disappearing.”

The prices have gone down, as the United States faced a glut due to its export market in China decreasing in size.

However, China’s first rebuttal against Trump’s initial tariffs was a 25 percent tariff on American soybeans, lowering the exports significantly. Because of this, farmers are taking tremendous hits financially and mentally due to lower prices and total sales.

“Let’s face it, when you’re worried about making that next rent payment or getting enough money to cover tuition next semester, that’s very stressful,” Hart said.

While Trump said in White House remarks in March 2018 that the end goal of the trade war is to primarily help American goods compete with Chinese goods and eliminate the trade deficit between the United States and China, more agricultural goods remain in the United States’ mean lower prices, harming the bottom line of farmers.

“[Iowa farmers] have definitely seen the short-term pain,” Hart said. “The question will be — will we see the changes and any long term gain from those changes?”

The agricultural industry has experienced the hits, but it has not fully adapted to negative growth from the ongoing trade war.

“Thinking of trade flows, it’s like when a river hits an obstacle: eventually the river figures out how to get around it,” Hart said. “But it takes a while for that to occur. The same thing goes for trade.”

Agricultural purchases have become an even larger issue in the trade war as of late because the United States and China cannot fully agree on a compromise trade deal.

In addition to agricultural issues of trade, Trump said in tweets that there was a large intellectual property theft problem going on, a reason he also gave when he signed off on the first of the tariffs.

“For many years China (and many other countries) have been taking advantage of the United States on Trade, Intellectual Property Theft and much more,” Trump said in a series of tweets in August. “Our [c]ountry has been losing hundreds of billions of dollars a year to China, with no end in sight. […] Sadly, past Administrations have allowed China to get so far ahead of Fair and Balanced Trade that it has become a great burden to the American Taxpayer.”

While farmers have experienced difficulties resulting in market losses from the trade war with China, the federal government has stepped in to attempt to alleviate some of the negative impacts the trade war has inflicted. Iowa farmers received assistance payments from the USDA’s market facilitation program. According to data from the department, farm bailout payments per acre ranged from $40 to $79 in Iowa.

Following months of the trade war and significant financial loss to farmers, on Oct. 11, a partial trade deal with China was outlined by the White House, followed by reactions from Iowa political leaders.

Gov. Kim Reynolds said in a statement that the announcement of the partial deal was “very encouraging news for our farmers, manufacturers and the economy as a whole.”

“With China’s commitment to purchase additional ag products and the promise to ease tariffs, this ‘phase 1’ agreement would represent a major step forward,” Reynolds said in the statement. “To build on this positive momentum, Congress should ratify the USMCA trade agreement to bring greater stability to our ag economy, our farmers and small businesses.”

Reynolds’ statement was joined by one from Iowa’s senior U.S. senator, Chuck Grassley. Grassley serves on the Senate’s agriculture committee.

“Any time progress is made, that’s good news,” Grassley said in his statement. “Farmers in Iowa know far too well that the trade war has caused real financial pain in the heartland. But we need to know more about this deal, and follow-through from China will be key. […] After so much has been sacrificed, Americans will settle for nothing less than a full, enforceable and fair deal with China.”