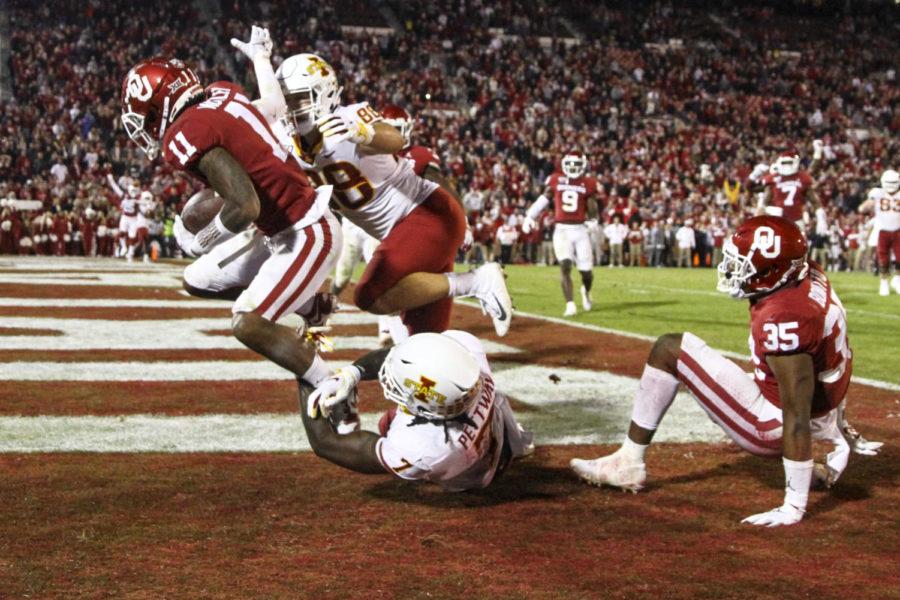 With great position and three pressured throws, Iowa State looked to be in position for some impact turnovers. Instead, disaster struck early on.

In the first quarter of Iowa State’s 42-41 loss to No. 9 Oklahoma, the Cyclones missed multiple chances to change the momentum with interceptions.

The first instance was from senior Justin Bickham, who didn’t quite get to star Oklahoma quarterback Jalen Hurts’ pressured throw, which resulted in a 45-yard touchdown from Oklahoma’s star wide receiver CeeDee Lamb.

That one wasn’t a drop, but the next two were.

Later in the quarter, junior Greg Eisworth dropped what would have almost certainly been a pick-six. Eisworth jumped the out route in front of the receiver, but the ball slipped through his hands.

Later still, White had a ball skip off his hands and into the waiting arms of Lamb for a big gain.

Not all of these resulted in Oklahoma scores, but they all could have been momentum-shifting plays for the Cyclones — who desperately needed something to fall their way early.

Iowa State’s offense got going later, but the defense couldn’t get any stops for some time. The Cyclones were playing from behind all game after their dreadful start.

“Our kids started playing,” said coach Matt Campbell. “We dropped three interceptions in the first half of the game.”

The fourth quarter came around and the Cyclones were losing 42-21. A quick touchdown to tight end Chase Allen cut it to a two-score game. However, Iowa State squandered a chance when it received the ball at the Sooner 32-yard line, but couldn’t get any points out of it.

A quick stop and an even quicker touchdown gave the Cyclones room to strike with only a seven-point deficit.

An interception by Lawrence White on an ill-advised throw from Hurts gave the Cyclones great field possession and with under a minute remaining, the Norman, Oklahoma, native Charlie Kolar caught a touchdown to bring the Cyclones within one point.

Iowa State opted to go for it and Oklahoma intercepted the ball on a controversial no-call in the end zone on a pass intended for receiver La’Michael Pettway.

“I thought we had a guy open for a second,” Campbell said. “It looked like we had a chance to catch the ball, but it got intercepted. Credit to them, they made the great play at the end of the game to win the game. Would I do it again? In a heartbeat.”

The open guy Campbell was talking about could have been Kolar, who was running a shorter version of the same route that Pettway ran to the left side of the end zone.

Kolar looked like he was momentarily open, but Purdy threw it to Pettway, resulting in the interception.

Purdy owned it, saying that it was on him, but Kolar had only positive words for his quarterback.

“The kid, the way he works and the way he leads this offense is something I’m at a loss for. It’s amazing,” Kolar said. “The character that kid has, it’s honestly like nothing I’ve ever seen before in my life, and I’ve played with some fantastic athletes. I’ve played with guys in the NBA the NFL here and there. I’ve never seen a kid like that, that just fights more than anything so, I have no idea what Brock saw. I trust Brock made the best decision for the team and move on. I would go to war with that kid any day of the week.”