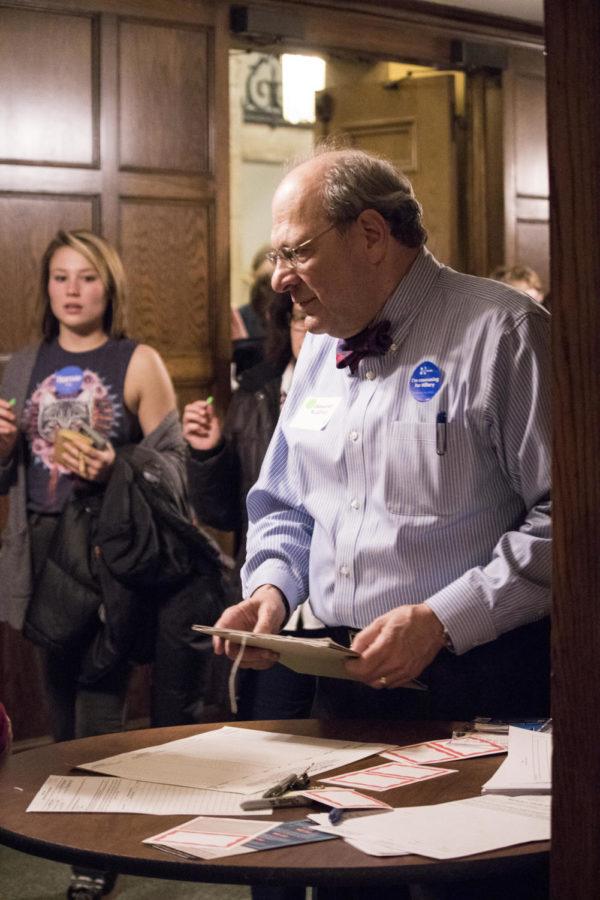 A caucus staffer hands out name tags to registered caucus voters Feb. 1, 2016, in the Memorial Union at Iowa State. The name tags guaranteed official caucus members were the only votes being counted.

The Democratic Party is preparing for large turnout in their caucuses and working on measures to help ensure more people are able to make their voice heard in the nominating contest.

The Iowa Democratic Party had previously planned on holding “virtual caucuses” so those unable to go to their precinct caucus site would be able to cast their vote electronically for their preferred candidates. The Democratic National Committee (DNC) nixed the state party’s plans in September.

The various remaining presidential campaigns are also gearing up for the caucuses as the number of days until caucus night tick down.

“No, you’re not dreaming: this weekend marks just 100 days until the Iowa Caucuses,” the Booker campaign said in a news release. “Cory 2020 organizers and volunteers will be launching canvasses in Iowa from river to river as part of a campaign-wide weekend of action to spread the word about Cory Booker’s vision to pull this country together by making sure no community is forgotten or left behind.”

The week also is set to include another Iowa caucus milestone alongside the 100 day mark, with the Iowa Democratic Party’s “Liberty and Justice Celebration” scheduled to host 14 of the 17 Democratic presidential candidates for speeches, the last time before caucus night that many candidates are expected to be at one venue in the state. Rep. Tulsi Gabbard, former Rep. Joe Sestak and author Marianne Williamson are the three Democrats not scheduled to speak at the event.

“[‘The Liberty and Justice Celebration’] is really going to highlight the tremendous energy in our party,” Price said.